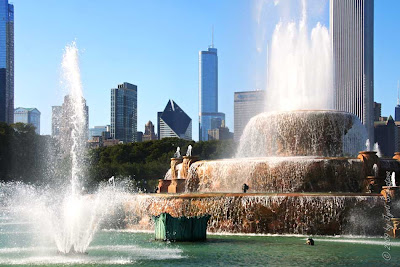 Buckingham Fountain .. A gift of Kate Sturges Buckingham, to the people of Chicago, in memory of her brother, Clarence Buckingham ..

By Public Art, we mean any art piece that is exhibited in a public space and is accessible to all .. However, not all public art pieces are publicly financed .. Some are gifts by art patrons to the people of Chicago .. These may be gift by individuals or gift by communities .. Here I bring out some gifts by individuals ..

B. F. Ferguson Monument Fund ..
It has funded some of the most notable public monuments and sculptures in Chicago .. The Fund is named after Benjamin Franklin Ferguson [1839 - 1905] who was respected lumber business man of Chicago .. When he died in 1905, through his will, he left $1 million of charitable trust fund to the Art Institute of Chicago, to be known as the B. F. Ferguson Fund .. This fund was to be ..

"entirely and exclusively expended by it under the direction of its Board of Trustees in the erection and maintenance of enduring statuary and monuments, in the whole or in part of stone, granite or bronze, in the parks, along the boulevards or in other public places, within the city of Chicago, Illinois, commemorating worthy men or women of America or important events of American history. The plans or designs for such statuary or monuments and the location of the same shall be determined by the Board of Trustees of such Institute. "

Gift of John Crerar ..
John Crerar (1827-1889) was a wealthy industrialist and businessman from Chicago, whose investments were primarily in the railroad industry. He is also well known for his philanthropic efforts. He left $100,000 for a giant statue of Abraham Lincoln .. The John Crerar Trust Fund commissioned Augustus Saint Gaudens for the work ..
# Lincoln Statue .. by Augustus Saint-Gaudens..

Gift of Judge Lambert Tree ..
Judge Lambert Tree (1832-1910) was a Chicago Circuit Court judge. He who achieved fame by presiding over the indictment, trial, and conviction of corrupt City Council members. A patron of the arts, Judge and his wife had an artists studio constructed "Tree Studios" to provide low cost housing and space for artists , now designated a Chicago Landmark. He also donated the statue of Robert Cavalier de LaSalle to the Lincoln Park ..
# LaSalle Monument.. by Count Jacques de La Laing..