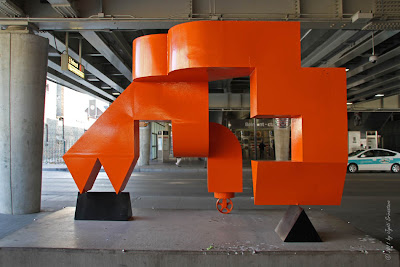 This sculpture was initially installed at Kimball Station, when it was rebuilt in 1974. The Station Artwork Guide, informs..
It would be another decade before more permanent art installations appeared, this time at the stations of the O'Hare Extension in 1983-85. This was followed by two decades without another permanent art installation. Art installations on CTA Stations, under Arts in Transit Program began in 2004. So for Public Art buffs, like me, this is a very important piece of sculpture; as it was installed before the Arts-in-Transit Program began. And it's important to note that it was initially installed at Kimball Station. I have no idea when was it bought to Belmont Station.

Jerald Jacquard’s sculpture, Space Junction of Energy, is a paradox; an abstract sculpture that describes the specific event of mass passing through space. The artist’s intention is to energize the viewer’s mind through perception of the ever-shifting composition of geometric forms. Formal yet animated, the sculpture is an arrangement of hollow geometric shapes constructed of cut and welded sheet steel. A visual blanket of orange paint unifies the variable components and emphasizes the internal balance and harmony of this dynamic composition. 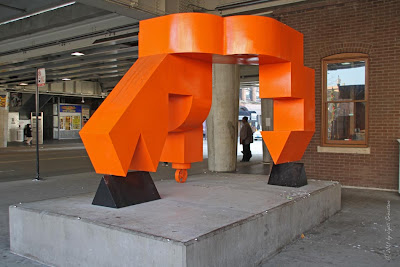 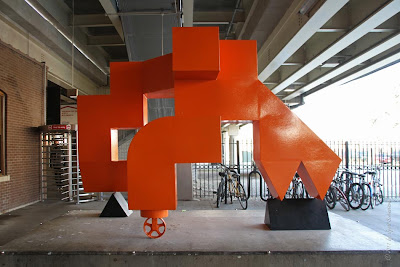 Apart from "Space Junction of Energy", Belmont Station also has a mural installation, "We All Ride the Train Together" by David Lee Csicsko.. 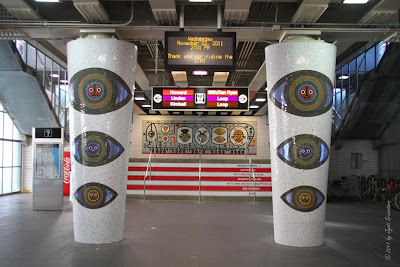 "We All Ride the Train Together" by David Lee Csicsko
For more, click here.

This sculpture was brought to the Belmont Brown/Red/Purple Station in Late 2009 (November/December).

Thank You Anon. for the information. If only I knew the name, I would have thanked personally. I really liked this piece and I appreciate the info.