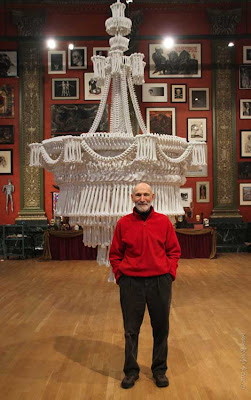 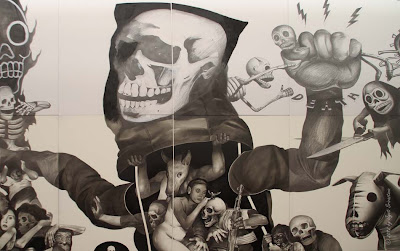 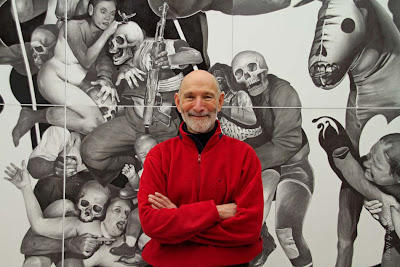 As we enter the exhibit, to the left is a site-specific mural, "Death March" by Hugo Crosthwaite. This large 25-by-10-foot black-n-white mural, sets the tone for the exhibition. It mentally prepares one, to enter a very unusual show, where the theme is mortality. The mural has an intriguing mix of cultural and religious symbolisms on the subject of death.

A marker on the wall reads..
The exhibition explores the ways in which artists and cultures use skulls, bones and skeletons to explore human experience and perception of mortality. Our awareness of death while we are alive gives shape and meaning to our existence. Mortality is a universal theme in all of the arts, found repeatedly throughout and across many cultures..

The exhibition is organized into two major sections, in two seperate galleries..
Sidney R Yates Galley.. exhibits the "Kunstkammer of Death". Kunstkammer, a German word, much used in the Renaissance period, means the cabinet of curiosities / cabinet of wonders. Kunstkammer was an early form of museum: part art gallery, part study room. In the context of this particular show, the Sidley Yates Gallery displays varied objects, sculptures, paintings, books, and artifacts, where the underlying theme is not the medium of expression, but the subject of mortality.

The Exhibit Hall.. exhibits "The War Room".. with images and artifacts showing the horrors and reactions to war expressed through art.. 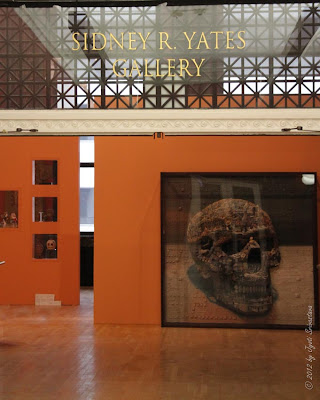 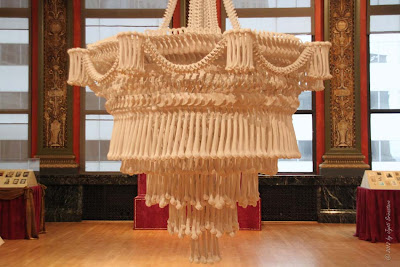 "In the Eyes of Others" - by Jodie Carey..
One of the highlights of the Sidney Yates Gallery is chandelier made of plaster cast bones.. 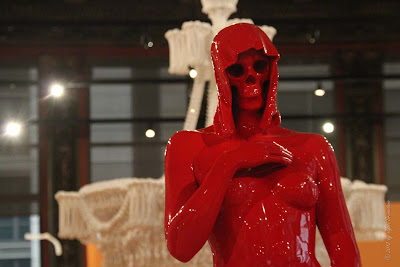 "The Death of Venus" - by Roger Reutimann..

"Headhunter's Trophy" - Unknown
Naga tribe of India..
These trophies were preserved and displayed to inspire young men as they trained to be warriors. The number collected brought prestige to the tribe. 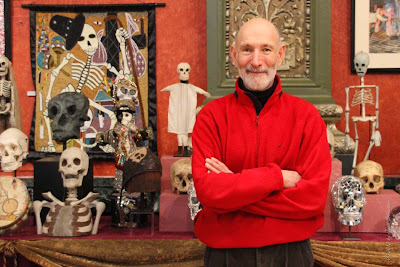 Richard Harris with some of the artifacts .. 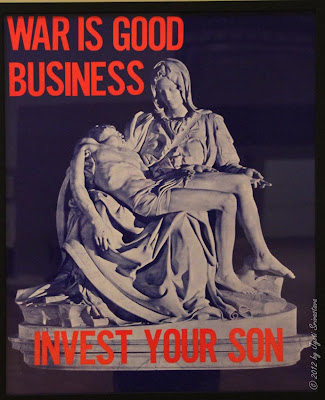 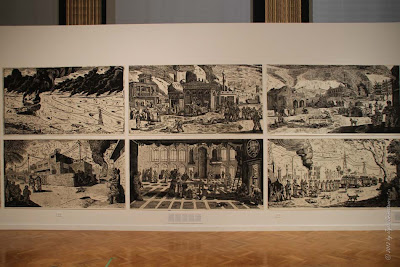 The Exhibit Hall has become the War Room.
The most significant achievement of the Richard Harris collection is that it brings together, for the first time in one collection, five great series of prints representing the horrors of war. Created between 1633 and 2007, these works of art provide an unprecedented opportunity to see and explore the relationships between the visions of these artists.
The five sets of prints are by Otto Dix, Francisco Goya, Jake and Dinos Chapman, Jacques Callot and Sandow Birk.The views were created by men on the losing sides of many of these battles. 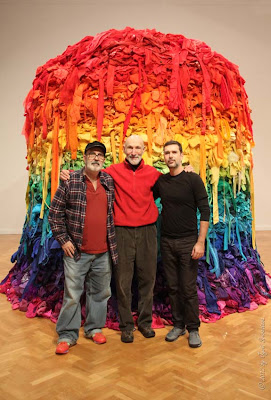 With more than a 1,000 pieces in display in area of about 14,000 sq. feet, the skulls, skeletons, prints and artifacts of the Richard Harris collection helps us to explore the concept of mortality, through different periods and different cultures. The exhibition educates, delights, astonishes, astounds, terrifies and exhilirates us on a theme as morbid as mortality.. In the end, it reminded me of a line at the beginning of the show ..Our awareness of death, while we are alive, gives shape and meaning to our existence..