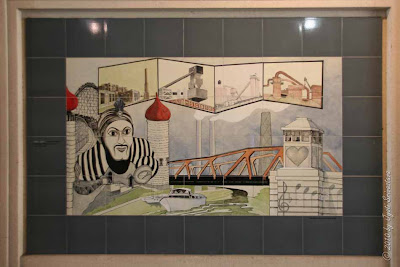 Chicago's Riverview was a world-famous amusement park that predated Disneyland and Great America. This popular city attraction, which existed between 1904 and 1967, featured such attractions as the Aladdin's Castle fun house and The Bobs roller coaster. In the distance, the John Hancock Building towers over the Belmont Street Bridge and marinas.

Insets
1904-1967: Riverview Park, featured "Aladdin's Castle" and "The Bobs"..
The Lawrence Avenue Pumping Station and three types of industries along the river.
Posted by Jyoti at Sunday, December 02, 2007