The Windy City will soon have a new symbol, "The Runners", by Theodoros Papagiannis 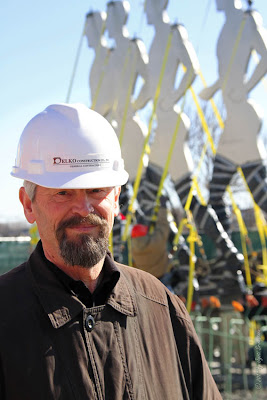 Greek sculptor Prof. Theodoros Papagiannis with "The Runners" being installed.. 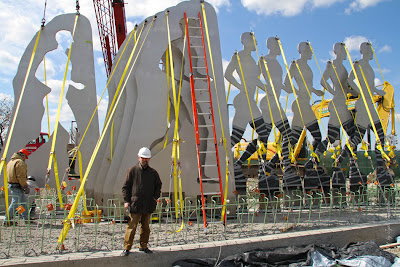 The City of Chicago will soon have a new symbol, "The Runners".. as 100 million annual visitors of the city, enter through O'Hare International Airport, will be greeted by "The Runners", along with the "Welcome to Chicago" sign. This massive 18-foot high and 40-foot long stainless steel sculpture is designed by Greek sculptor, Theodoros Papagiannis. It is a gift from Chicago Athens Sister City Committee to the City of Chicago Public Art Collection. 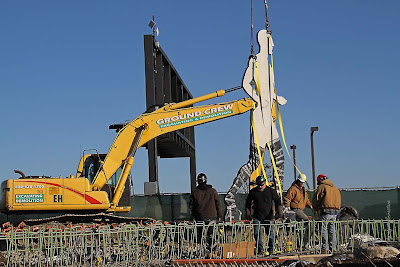 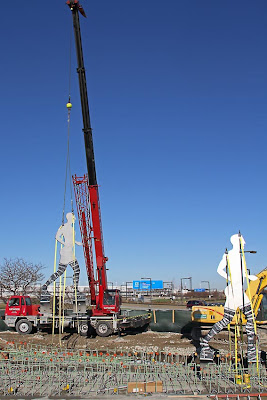 The Installation..
Although the construction work on the site has been going on for sometime now, and this Tuesday [April 5] the major installation of "The Runners" took place. It was a beautiful April morning, with crisp blue sky and mellow gloden sunshine, and the first of the Runners was installed at about 7.30 am.. The work progressed very smoothly, and by 3 pm all the 10 pieces were installed.
These are massive pieces.. Each of the first five runners are about 6,000 pounds [3 tons] and the later empty runners are about 12,000 pounds [5-6 tons]. These pieces are water-jet cut.. 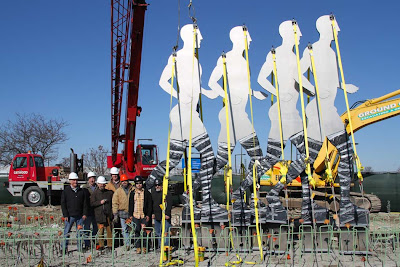 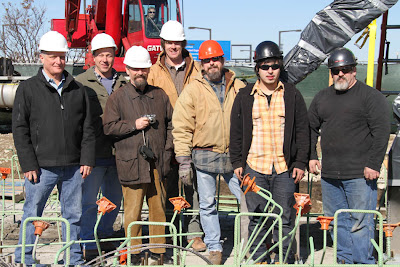 Thank You to the team for the excellent work..

The Athens Committee.. of Chicago Sister Cities International..The Runners sculpture is of special significance of Greek-American Community. It is a gift from Chicago Athens Sister City Committee to the City of Chicago Public Art Collection. Professor Papagiannis explained to me how he wanted to represent the ancient city of Greece into modern settings of the City of Chicago. The sculpture in every sence looks modern, although they are similar to ancient Greek pottery figures, as The Runners move through time emerging from antiquity to meet the present. The five runners symbolize the moment of Greeks into the five continents. They also symbolize marathon runners. 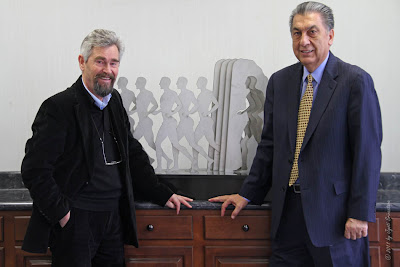 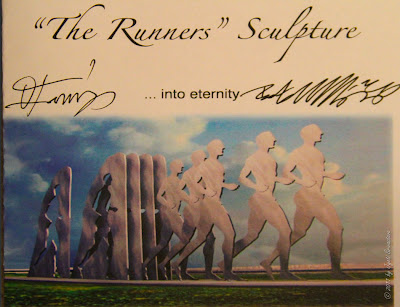 The day before the installation on April 4th, I met with Prof. Theodoros Papayannis and Chairman, Athens Committee Demetrios Kozonis at Delko Construction, which took the construction work. It was a great talk on the Greek-American community. Athens became an official Chicago Sister City in 1997 under the guidance of Yiannis Grivas, a Judge and former president of Supreme Court of Greece. Mr Kozonis explained to me about the long selection process of this sculpture. In 2006, the city of Chicago sponsored an international sculpture competition with over 50 entries from around the world. Three finalists were chosen.. and finally "The Runners" emerged the winners.. Then began the long process of fund-raising. Over the years, the Greek community has raised about $ 750,000 and the process is still on, as the project costs more than $1 million. 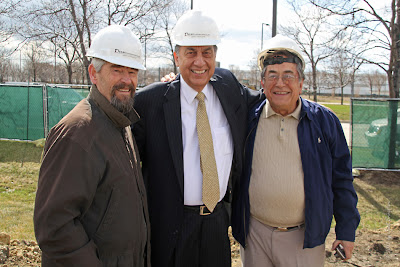 I had the immense pleasure of meeting with the sculptor Professor Theodoros Papagiannis, Chairman of Athens Committee Demetrios Kozonis, the host of Chicago Greek hours Sotiris Rekoumis.

"The Runners", Public Art Project is a partnership of the City of Chicago Department of Cultural Affairs, Department of Aviation, Chicago Gateway Green, and the Chicago Sister Cities International Program. 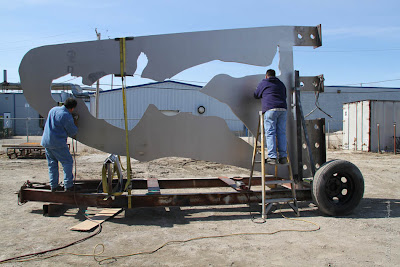 Before the installation, "The Runners" got finishing touches at Duroweld Co. Inc. Thanks to General Manager Richard Austin for the allowing me a visit.. For more images, click here..
Posted by Jyoti at Friday, April 08, 2011