Public Art in the Loop 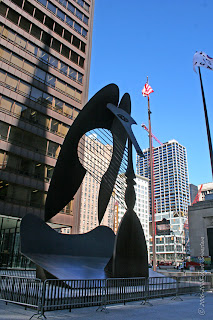 The Loop is now one of the world's largest outdoor museums for contemporary art ...

The year 1967 marks the beginning of a series of outdoor public art pieces installed in the Loop. The first monumental modern sculpture to be unveiled was the "Picasso", in the Civic Center Plaza on August 15, 1967 ...

Although the Picasso was initially received with scorn and ridicule, it soon became an symbol of Chicago ... and thereafter many more public art pieces were installed in the Loop area ...

Then the year 1974 is very significant, when two important sculptures were installed in the loop ...
# Four Seasons - Marc Chagall
# Flamingo - Alexander Calder
Marc Chagall was present when his sculpture were dedicated to the city of Chicago ...In fact, Chagall had arrived in Chicago several weeks earlier from his studio in France to oversee final details of this massive five-sided mosaic sculpture, which he and his devoted friends, Chicago philanthropists William and Eleanor Wood Prince gifted to the city of Chicago ...
Also Alexander Calder, was present when his bright red "Flamingo" was unveiled ... In fact he arrived at the Federal Center Plaza atop a white-and-gold circus wagon drawn by 40 horses to dedicate his Flamingo, ... [although Pablo Picasso could never make it to the US]...

The 1974 events helped inspire a city ordinance four years later called City of Chicago Percent-for-Art Ordinance ... It requires 1.33 percent of the construction budget for municipal buildings to be used for artwork ... As a result many art pieces are displayed at City Hall, courthouses, libraries, and police and fire stations ...

* NOTE: Most of the informations are gathered from the official website .. Chicago Public Art Program .. click here ..

The Flight of Daedalus and Icarus - by Roger Brown
Completed: 1991
Location: 120 N LaSalle Building ...
* I've also read this mural named as "Arts and Science of the Ancient World" ..

For many more pieces of Public Art in the Loop, please check out the .. List of Public Art images displayed in the blog .. click here ..
Posted by Jyoti at Monday, November 24, 2008