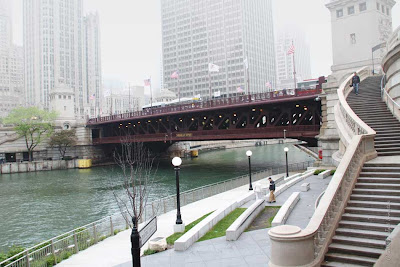 The Michigan Avenue bridge, a designated Chicago Landmark, has many interesting features. Here the focus is on the sculptures and markers on the bridge that spells it's history and engineering feats ..

A plaque in honor of La Salle & Henry De Tonti..
who passed through the Chicago River on their way to the Mississipp in 1681..
Location: Southwest corner, Michigan Avenue bridge..
# For more.. click here..

The Chicago River..
The marker spells out the importance of Chicago River in the early development of the city..
Location: Southwest corner, Michigan Avenue bridge..
From 1673, commerce and civilization followed the natural waterway from the seaboard to the heart of the continent.
The statergic importance of the early American development of the junction of the Chicago River and the Lake Michigan led to the establishment here of Fort Dearborn and to the founding of the City of Chicago...
# For more.. click here

Markers along the Wacker Drive..
The granite squares are engraved with the names of individuals and businesses who have sponsored the planting of a tree. The trees are planted as part of The Chicago Gateway Green Committee's efforts to a greener Chicago Metropolitan Area..
# For more.. click here..

Bust of Pointe DuSable..
Sculptor: Erik Blome
Installed: 2009
Location: Pioneer Court..
To the north east end of the bridge is the bust of Jean Baptiste Pointe DuSable...
DuSable is popularly known as "The Father of Chicago", was the first known settler in the area which is now Chicago, Illinois. Du Sable was recognized by the State of Illinois and the City of Chicago as the Founder of Chicago on October 26, 1968...
# For more.. click here..

Dont miss - the bridge tower top..
Looks like a Ram head..
Symbolic??
Any information is welcome..
I really am not aware if the Ram's head has any meaning..
Although symbolically, Ram's head is a symbol enery, power, vilatily..