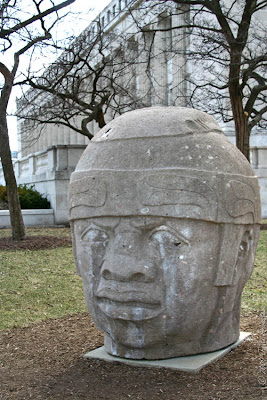 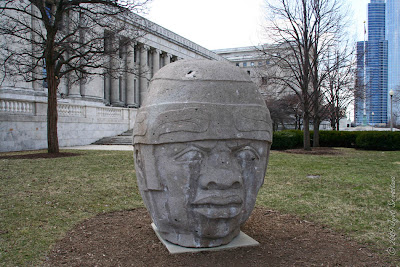 The ancient Olmec, one of the first complex societies in the Americas, are remembered for their colossal head sculptures, 17 of which have been recovered to date. Each original head is distinctive and believed to embody the likeness of an individual leader. Though all of the heads were carved in a stylized manner, Olmec Head #8 is considered the most naturalistic. The State of Veracruz, Mexico donated Ignacio Perez Solano’s 1700-pound stone replica to the City of Chicago.

The plaque reads ..." This sculpture is a replica of Olmec Head #8 from the site of San Lorenzo. It is one of 17 known colossal heads created by the ancient Olmec people in the states of Veracruz and Tobasco, Mexico.
The Olmec flourished in the Gulf Coast region of Mexico from 1300 to 300 BC. Most scholars believe that Olmec carved these stone heads to commemorate their rulers."

Another plaque reads ...
" Olmec Head, Number 8
Gift of the Government of the State of Veracruz, Mexico and Miguel Aleman, Governor of Veracruz, to the People of Chicago.
Dedicated October 21, 2003
City of Chicago
Richard M Daley, Mayor
City of Chicago Public Art Collection."... 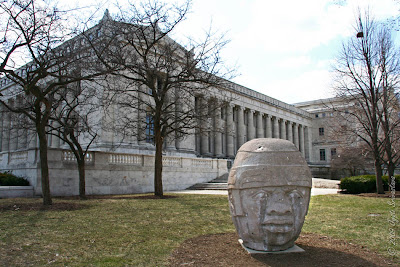 The Olmec heads are a powerful and incontrovertible evidence of the presence of Africans as the earliest inhabitants of Mexico and the surrounding regions.

The head is most likely evidence of Polynesian voyagers who are the only ancients to navigate the Pacific. Next stop after Rapa Nui (Easter Island) is Mexico.