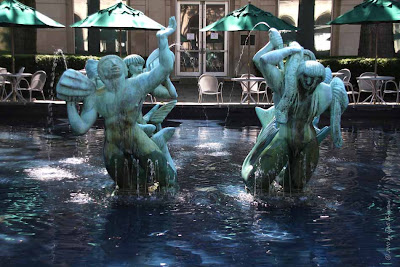 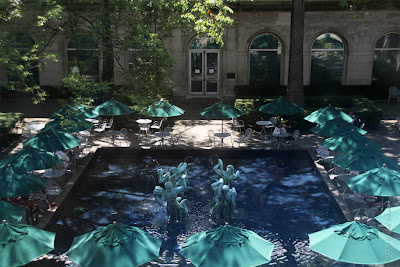 McKinlock Court..
It's a 11,640 square foot outdoor court at the Art Institute of Chicago.. Centerpiece of this court is "Fountain of the Tritons" by Carl Milles.. The court has beautiful Dutch Elm trees.. The McKinlock Court is attached to the Garden Cafe..

Fountain of the Tritons..
Sculptor: Carl Milles..
Sponsored by the B. F. Ferguson Monument Fund, to commemorate John Ericsson and other Swedish Americans. Ericsson created the "Monitor", the first iron-clad turret ship, which did battle with the Merrimack in the Civil War.

McKinlock Court was landscaped in 1924. By 1931 the court was remodeled so the Fountain of the Tritons could be installed. This court is open for dining during the summer months.. 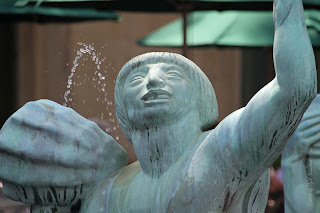 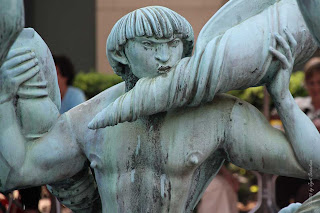 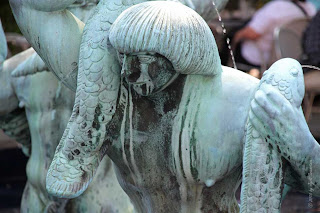 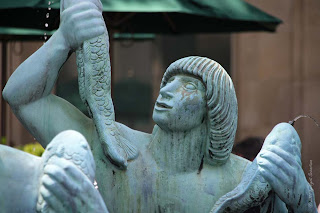 Who/ What's a triton?
Wikipedia informs click here..
Triton is a mythological Greek god, the messenger of the sea. He is the son of Poseidon [god of the sea], and Amphitrite [goddess of the sea]. He is usually represented as a merman, having the upper body of a human and the tail of a fish, with shoulders barnacled with sea-shells. Triton's special attribute was a twisted conch shell, on which he blew like a trumpet to calm or raise the waves. 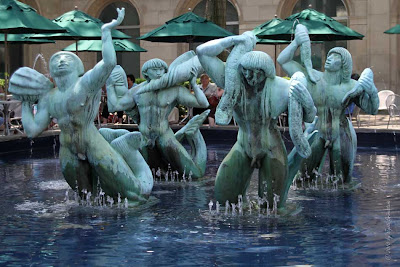 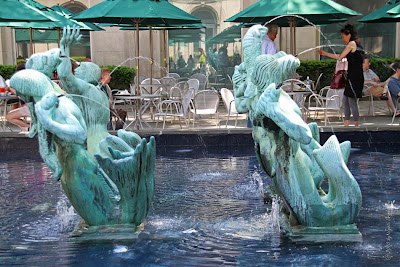 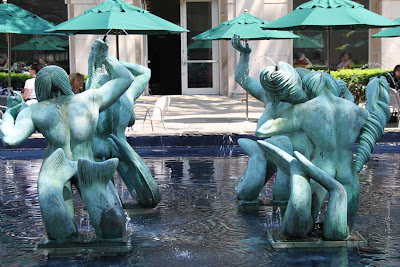 The book Chicago's Public Sculpture by Ira J. Bach and Mary Lackritz Gray, has some interesting observation on the artist and this sculpture fountain.. An excerpt..
Although Milles studies in Paris, where Auguste Rodin was one of his teachers, his fountains and memorials in his native Sweden and in the US represent a conscious departure from the naturalism that dominated sculpture at the turn of the century. They reflect the artists independent spirit, his appreciation of classical and Gothic sculptures and his very strong Nordic roots. These qualities are seen in the way Milles imbued his rather elongated and stylized Tritons, characters from Greek mythology, with the spirit of water deities from Scandinavian chronicles..

I loved this sculptural fountain by Carl Milles ..
Carl Milles was a Swedish sculptor, best known for his fountains. He was married to artist Olga Milles and brother to Ruth Milles and half brother to the architect Evert Milles..
Here's a website I found that gives an insight into his works ... "Millesgarden" .. click here ..
Posted by Jyoti at Saturday, June 27, 2009