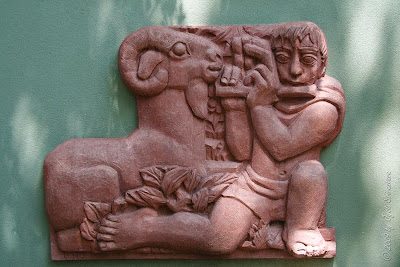 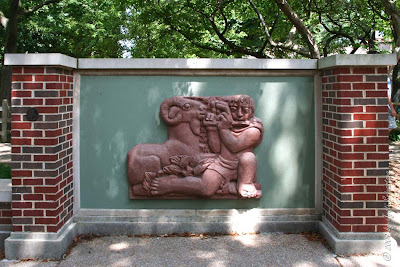 Rites of Spring ..
Sculptor: Milton Horn ..
The terra cotta sculpture, dating from 1952, is mounted on a brick and limestone wall designed for the sculpture. Presented by the Milton Horn Art Trust, it was unveiled in 2004. 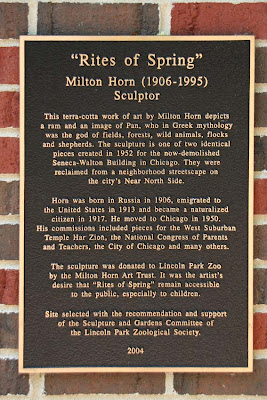 The plaque reads ...
This terra-cotta work of art by Milton Horn depicts a Ram and an image of Pan, who in Greek mythology was a god of fields, forests, wild animals, flocks and shepards. The sculpture is one of the two identical pieces created in 1952 for the now-demolised Seneca-Walton Building in Chicago. They were reclaimed from a neighborhood streetscape on the city's Near North Side. 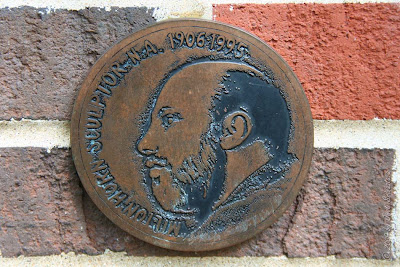 Wow. Just how much art can they stuff into Lincoln Park Zoo. These are nice art pieces but they have no relevance to the Zoo, and seem to fill crowd every nook and cranny of space.
Having lived in Chicago for 40 years and all of a suddenly seeing an avalanche of City owned sculptures makes you wonder we these pieces have been for all these years. It's nice to see them restored and displayed but clutter comes to mind as I see them packed into a few locations. Editing and relevant placement may be something the Park District should consider.

I applaud the noble intent and huge undertaking by the Park District. Bravo for unearthing and restoring these pieces. May I suggest restraint in future placement. Parks provide us with open space to breath but are rapidly being crowded with "features". We are at the tipping point of too much of a good thing.