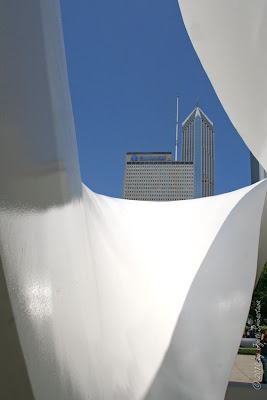 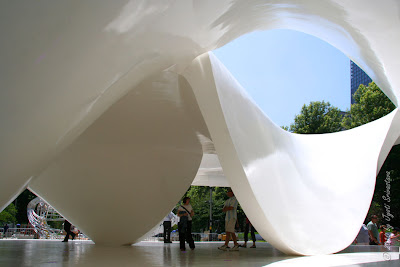 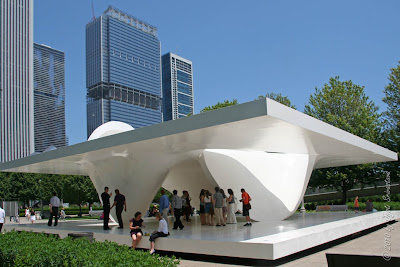 The Burnham Pavilion ..
By: UNStudio .. Ben van Berkel
Location: Millennium Park ..
The Burnham Pavilions commemorate the 100th anniversary of Daniel Burnham's Plan of Chicago. Two such pavilions are commissioned in the Millennium Park ..
# For information on the commission of these pavilions .. click here ..
# For information on the other pavilion by Zaha Hadid .. click here ..
The pavilions are temporary: June 19, 2009 to October 31, 2009 ..
However there was a delay the Zaha's pavilion, which opened on August 4, 2009.
Dont know if it was good planning or lucky stars that UNStudio's pavilion was in front of Zaha's pavilion, or the delayed construction Zaha's would have totally robbed the inviting nature of this one ...

Here's from the architect himself ..
"The UNStudio Burnham Pavilion relates to diverse city contexts, programs and scales. It invites people to gather, walk around and through and to explore and observe. The pavilion is sculptural, highly accessible and functions as an urban activator" ...
- Ben van Berkel .. 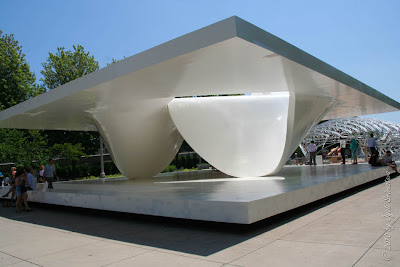 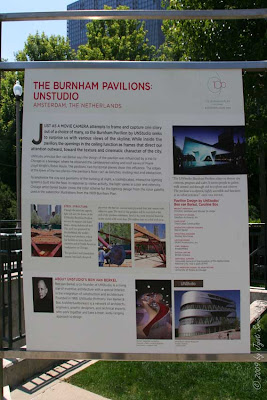 The marker reads ..
Just as a movie camera attempts to frame and capture one story out of a choice of many, so the Burnham Pavilion by UNStudio seeks to surprise us with various views of the skyline. While inside the pavilion the openings in the ceiling function as frames that direct our attention outward, towards the texture and cinematic character of the city.

UNStudio principal Ben van Berkel says the design of the pavilion was influenced by a trip to Chicago as a teenager where he observed the cantilevered ceiling and roof eaves of Frank Lloyd Wright's Roobie House. The pavilions' two horizontal plains show this influence. The edges of the lower of the two planes - the pavilion's floor - act as benches, inviting rest and interaction.

To emphasise the size and geometry of the building at night, a sophisticated interactive lighting system is built into the floor. In response to visitor activity, the light varies in color and intensity. chicago artist Daniel Sauter chose the color scheme for the lighting design from the color palette used in the watercolor illustrations from the 1909 Burnham Plan.

Steel Structure ..
Although the structure appears light and airy, the frame of the UNStudio Burnham Pavilion receives its support and shape from a strong skeleton of steel. The steel was sponsored by ArcelorMittal, the world's leading steel producer which has facilities in more than 60 countries and its North American headquarters in Chicago.

The pavilion's steel foundation sustains intricately designed plywood ribs that are covered with plywood skin and coated with reflective paint. The steel in this pavilion will be recycled at the end of the pavilion exhibition. Steel is the most recycled material in the world with more than 250 million tons recycled each year. 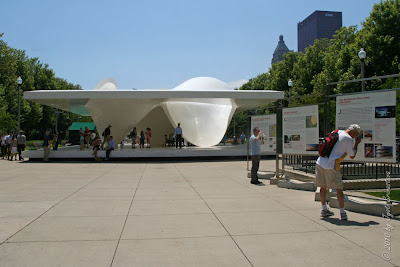 About UNStudio's Ben van Berkel ...
Ben van Berkel, a cofounder of UNStudio, is a rising star of inventive archtecture with a special interest in the integration of construction and archtecture. Founded in 1988, UNStudio is a network of architects, engineers, graphic designers and technical experts who work together and take a fresh, wide-ranging approach to design ..
Posted by Jyoti at Thursday, August 20, 2009