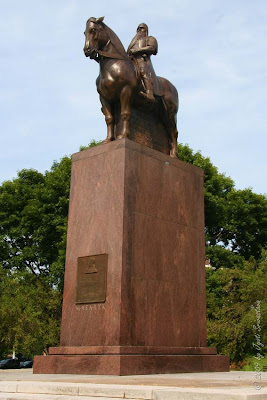 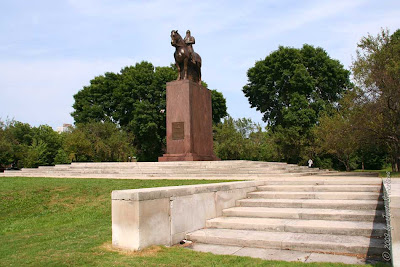 The plaque reads ...
1850-1937 ..
Rising out of the fertile Bohemian soil, the Blanik Mountain stands eternally vigilant, its verdant slopes sheltering a wealth of age-old folklore. According to an old legend, slumbering within its cool mountainous depths, the Blanik Knights stand guard, ready to ride forth with Saint Wenceslaus to lead them in their nation's hour of need ..

Tomas Garrigue Masaryk Czechoslovakia's first President symbolized in flesh this legendary vigilance, when in the fury of World War I. His Czechoslovak Legions fought to realize the the nation's fondest dreams. Thus cast in bronze the Blanik Knight is but a monumental symbol of Thomas G. Masaryk's eternally valid ideals of freedom, democracy and humanity ...
Posted by Jyoti at Tuesday, August 11, 2009

I'm a bit confused for whom is this monument. Saint Wenceslaus, Blanik night or Masaryk?

It is for Masaryk.