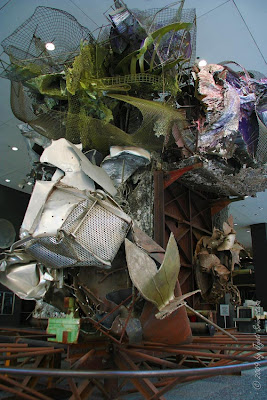 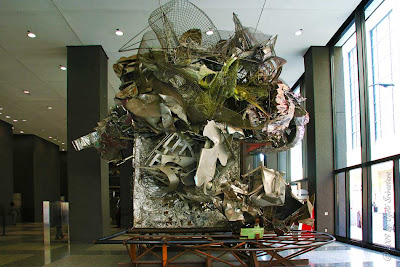 Commissioned by the U.S. General Services Administration through its Art-in-Architecture Program ..

To fabricate this massive abstraction, Frank Stella combined several small metal sculptures into one large piece and poured molten aluminum over the structure to create an enhanced, cohesive form. The Town-Ho’s Story is part of Stella’s “Moby Dick” series. According to Robert K. Wallace, a Melville Scholar and author of a book on Stella, “The sculpture takes its name from a chapter of Melville’s novel that is a tale about Steelkilt, an audacious sailor who uses both mind and fist to resist mistreatment.” 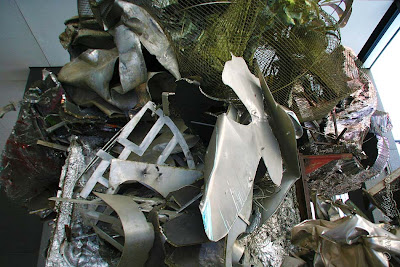 This is a piece of junk!

I saw this the other day. It is so gawd awful that I had to look to see who got paid off to dump the waste on a federal building. Its not only junk, its a horrendous. The thing even smell bad!

I imagine that this is what a lint ball looks like if you magnify it 1,000,000 times. Question is: where is the large waste basket that it belongs in?

thanks for posting this info; I always wondered what that ball of smashed-up stuff was in that building

FWIW, I worked there on 13th floor when it was delivered. They had to dismantle the whole front of the building when it was delivered at night.
I also saw the 'dedication' celebration when I was leaving work late one night as it was being held in the lobby.
What a hoot!

According to Robert K. Wallace, a Melville Scholar and author of a book on Stella, “The sculpture takes its name from a chapter of Melville’s novel that is a tale about Steelkilt, an audacious sailor who uses both mind and fist to resist mistreatment.”

I think this piece is wonderful! I am struck by the negative criticism and mistreatment.

The Town-Ho was attacked by Moby Dick. I think the expert on Stella has missed the boat on this one. If you look at it in person, you can see that it is a ship and a whale next to it. The whale's fin/tale is clearly visible in the top photo with a harpoon sticking out of it. The ship is visible in the bottom picture, but is hard to see. It is the left side of the ship and it is pointed to the left in the photo. If you see it in person it is clearer. Start by looking at the bottom and imagine the base to actually be the surface of the ocean. The V shaped piece of metal is the underside of the ship. The whale is a crumpled piece of metal sitting next to this. Its really not that hard to see it.