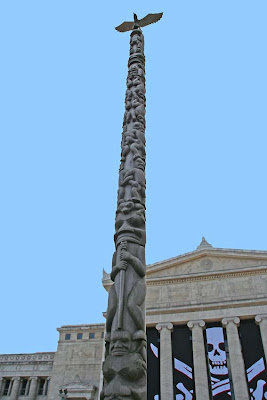 Totem Poles..
Totem poles, an art form closely associated with the Native Americans. Totems were erected to commemorate births, deaths, and victories and sometimes to display wealth. A totem can be the symbol of a tribe, clan, family or an individual. Each pole is different and represent human, animal and supernatural images to tell their stories. Totem poles were carved on large trees, usually cedar. There were complex rules and rituals regarding their carvings. These were common in the Indigenous cultures of Pacific Northwest Coast.

Few totem poles can be found in Chicago..
- "Kwanusila" totem pole in the Lincoln Park. Although it's "contemporary" and was completed [relatively recently] in 1986, it's a replica of the original in 1929 [still not that old], which is now in Vancouver, Canada.
- "Big Beaver" totem pole in the campus of Field Museum of Natural History.. Also contemporary! 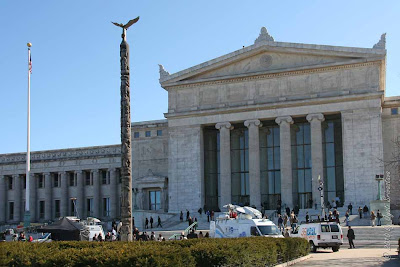 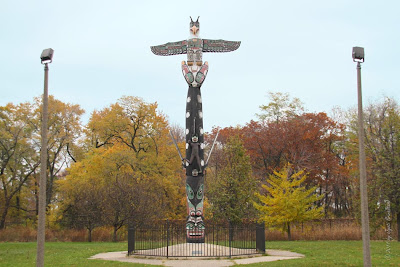 Kwanusila, The Thunderbird..
Kwagulth Indian totem pole..
Sculptor:Tony Hunt, the chief of the Kwagulth tribe in British Columbia..
The existing totem pole installed in 1956. It is a replacement of the original toem pole that stood at the site since 1929.
Location: Lincoln Park at Addison Street..
just east of Lake Shore Drive in the Lake View neighborhood..
For more, click here..