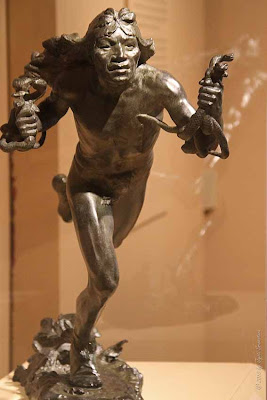 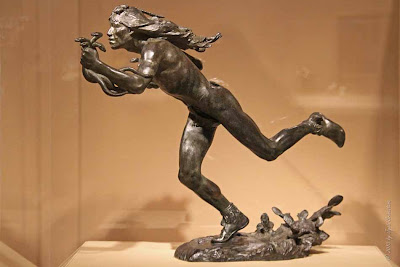 The Moqui Runner ..
Also known as.. The Moqui Prayer for Rain - The Returning of the Snakes..
The marker reads..
"The vast array of ethnographic material at the 1893 World's Columbian Exposition in Chicago piqued Hermon Atkins MacNeil's interest in Native American culture, and he traveled to the West in 1895 to experience it first hand. The Moqui Runner depicts the Snake Dancer, a Hopi [or Moqui] prayer for rain in which priests run from the high mesa to the plains while grasping handfuls of snakes. MacNeil achieved a new level of dynamism that reflected the thrill of the spectacle, as described by his friend, the author Hamlin Garland..
"They had rushed four miles at top speed, but they mounted the trail toward Walpi with incredible celerity. As they passed me, their long hair waved up at the sides in a peculiar and beautiful fringe. I have never seen anything finer in the way of motion"..

Thanks for these pictures.
Fantastic sculpture.
First of all, perfectly reflected the dynamics, which is not often occur.
This dynamics, combined with an expression on the face gives an excellent effect.