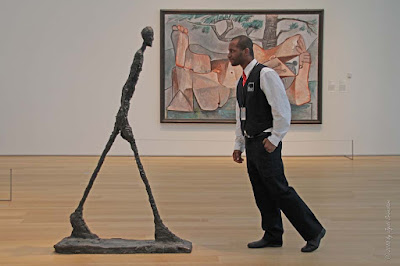 Walking Man-II [1960].. and Anthony Woods who was working at the Gallery. I requested him to pose for a photo. Thanks Anthony!

Alberto Giacometti [1901-1966]
was a key sculptor of the post-war years and was an inspiration throughout the West..
Most of his works are of thin figures, standing and full length. Women always hold their arms close to their bodies and stand still, while men are sometimes modelled in open stride. The main variation is of arrangement and size..
- Andrew Causey in his book "Sculptures Since 1945".. 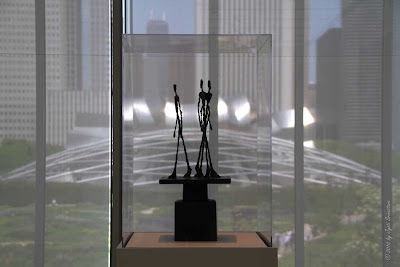 Three Men Walking - II [1948-49].. Earlier in his career, Giacometti had composed sculptures of several parts on flat bases, like tableaux. Hans [Jean] Arp and Henry Moore had made move in similar direction.. 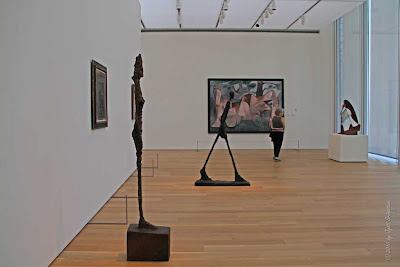 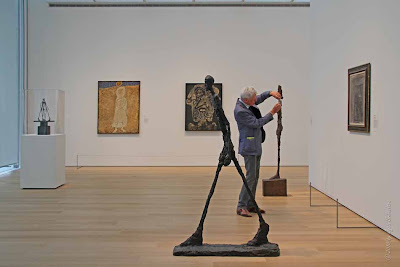 This Gallery has works by Henry Moore, Alberto Giacometti, Constantin Brancusi and Jean Dubuffet.. [And all these artists are famous for distorted or stylized human figures]..

Marker reads [about Alberto Giacometti]..
After first producing work associated with Surrealism , Alberto Giacometti began making his distinctive elongated, skeletal bronze sculptures in Paris in late 1940's. His works struck a powerful chord with Existentialists writer Jean Paul Sartre, who saw the isolated figures as a visualization of his own ideas about the loneliness and ultimate absurdity of the human condition at the end of World War II..
For his part Giacometti insisted that he was simply attempting to convey his own experience of looking at people though his method of working was sympathetic to Sartre's response. The artist often reworked his sculptures over long periods of time, building up a clay model and then stripping it down, until he gradually eroded the figure's body, to essential fragile core..

Interesting presentation.
I like his works.
First photo is excellent.
Great idea and effect.
But also cool is last picture (even though not posed)