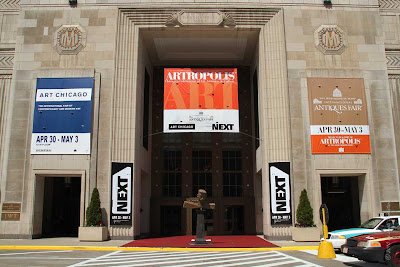 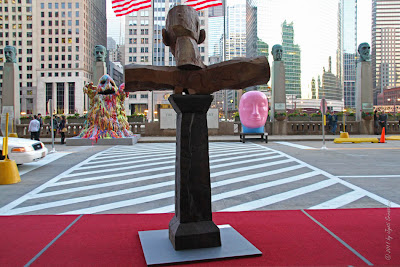 I'll begin with the basics..
Art Chicago is a part of Artropolis,
with tagline that captures it's ethos,
Artropolis: Chicago's celebration of art, antiques & culture..
Atropolis, an annual event is composed of three events..
- Art Chicago
- NEXT, and..
- The International Antiques Fair
Art Chicago is the annual international fair of contemporary and modern art .. NEXT is a showcase for the world’s emerging talents .. and.. The International Antiques Fair is one of the world’s best dealers in antiques and fine arts..

Art Chicago.. brings together world’s leading emerging and established galleries. It offers curators, collectors, artists and enthusiasts a survey of current and historic work, in a wide variety of media including.. painting, photography, drawings, prints, sculpture, video and special installations.. 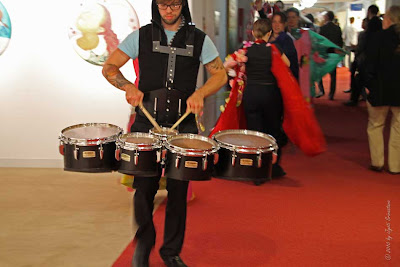 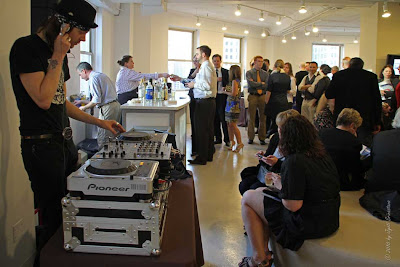 The event kicked-off with Preview "First Look" on Thursday, April 29.. with the usual drum rolls & DJs, meetings & greetings, cocktails & live performances.. Most of the people were art enthusiasts, having a sneak preview of what's the latest.. And behind all this were some serious business deals, a fair where artists and art-buyers could strike a deal.. Understandably, one of the most serious aspects of the art fair, the business aspect, remains largely under wraps.. And this is something I would like to know about, and it would take sometime, as of now, the exhausted participants are trying to get back to their normal routine.. So as of now, I would cover just the show aspect of the fair and leave the business aspect for some more inquiries.. 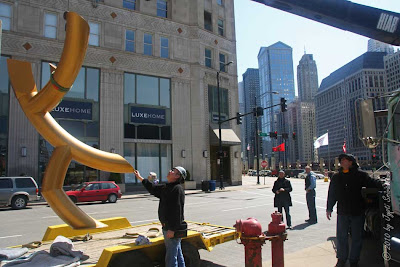 As any good show would demand, there were long-term preparations.. There are about 29 large scale works on display in the indoors and outdoors public spaces of the Merchandise Mart..
Of these 12 public art pieces are by the Chicago Sculpture International [CSI] team, titled "Countercurrents", installed along the Lower Orleans Street, next to Merchandise Mart..
These remain after the show ended on May 3rd.. So check out the works by Bob Emser, Fisher Stolz, Nicole Beck, Terrence Karpowitz, Ruth Migdal, Mike Brown, Victoria Fuller, Dusty Folwarczny, Mike Brown, Eric Lindsey, Ted Garner and Ron Gard..
Check out "Countercurrents".. click here.. 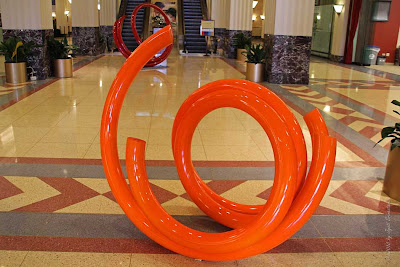 Apart from these, there are another 17 large-scale installations in the indoor and outdoor public spaces of the Merchandise Mart.. 15 are part of Art Chicago and 2 are part of NEXT exhibits..
The 17 large-scale Art Chicago exhibits includes works by Niki de St. Phalle, Ira Sapir, John Clement, Jun Kaneka, Kiki Smith, Dietrich Klinge, Jean Wells, Rafael Barrios, Edward Wicklander, Rodney Graham, Herbert Mehler, Dzine, Javier Marin, Keizaburo Okamura and Rocio Rodriguez.. And the 2 large- scale work as part of NEXT exhibit includes works by Tony Tasset and Susan Giles..
Check out all these installations.. click here..

All the 29 large-scale installations remain after the main art-fair is over.. And all these are at public spaces of the building, so anyone who could not make it to the fair, could still check them out.. 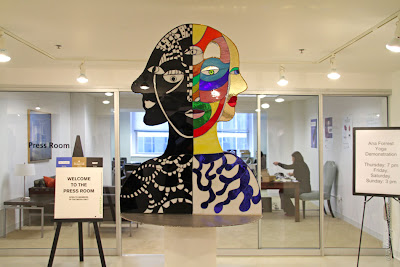 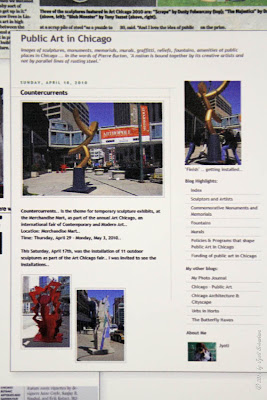 The Press Room bulletin board on Media Coverage, featured a print-out of my Blog Post on outdoor installation by CSI members, "Countercurrents"....
For more, click here... 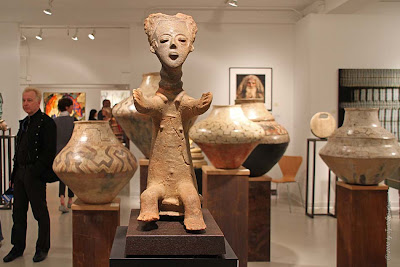 Now coming to the main exhibition, there were about 150 galleries, from all over the country and a few from abroad.. It included exhibitors from London, Dublin, Birmingham, Berlin, Frankfurt, Amsterdam, Paris, Barcelona, Copenhagen, Toronto and Shanghai among others.. However, home turf had an advantage and about 25 galleries were from Chicago, followed in numbers by representation from New York and then there were exhibitors from Los Angeles, Beverly Hills, Miami, Seattle, San Franciso, Celveland, Baltimore, Nashville, Houston, Dallas and the nearby St. Louis..

And as far as the exhibits are concerned, there was something for everyone.. sculptures, paintings, photography, ceramics, multi-media.. you name it.. 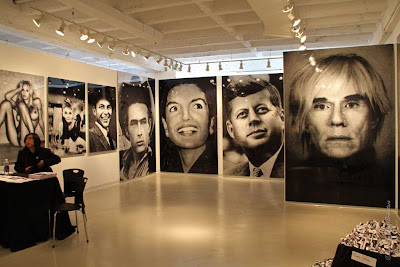 One of the must-sees of the show was the one man art-gallery ChinaSquare, NY of artist Alex Guofeng Cao.. who specializes in mosaic images, all black-&-white.. where the image of one person is made-up of a number of tiny images of another person.. Obama from Lincoln, JFK from Jackie, Marilyn Monroe from Brigitte Bardot.. What struck me, apart from his work was his friendliness, he was there self-assured and relaxed enjoying the popularity without the attitude..
For more of Alex Guofeng Cao's works.. click here.. 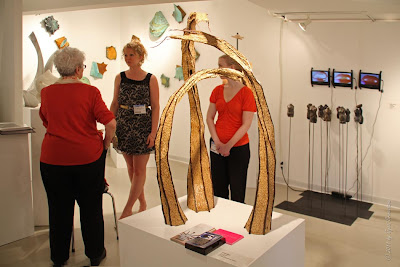 Survey America..
Worth checking out in the galleries were the Survey America plaques.
These highlighted the extraordinary works by artists living and working in the United States.. Like this 'War Eagle' by John Buck of Shark's Ink, Lyons, Colarado..
For more on Survey America.. click here..

Partisan..
Partisan included works that explore the social and political ideas or emerge as political actions in their own right. It was curators by Rachel Furnari and Karsten Lund.
Partisan revisits the open question of the impact of politically-motivated art, while raising the possibility of finding diverse forms of political meaning where they are least expected..

Florian Graf presented by the Consulate General of Switzerland in Chicago..
These walls were moving around in the gallery space..

And finally.. The big question..
What determines the success of an Art Show?
Number of visitors? Sale? Impact on trends? Critical reviews?
And although it's difficult to quantify any of these matrixes, one can safely say that it was a huge success...

Any project on this scale requires meticulous planning, coordination, lots of headaches and smiling faces to cover it all.. Although I dont know the entire team of organizers, I did meet a few.. They were all at the top of the game.. Well informed, helpful and determined to make the event a success!!!
Kudos to the team!!

And here is Tony Karman, Vice President, Director Art Chicago..
This shot was taken when it was still very cold, on April 17th, 2010.. at the installation of the large-scale sculptures by CSI team as part of Art Chicago.. There he was on the ground, working and overseeing one of the aspects of huge project named Artropolis!!!
And Well Done!!
Hope you get a break after all that work!!!

And although the event is over.. it's impact, especially on the participants is far from over.. and in some cases, the recognition has just begun... 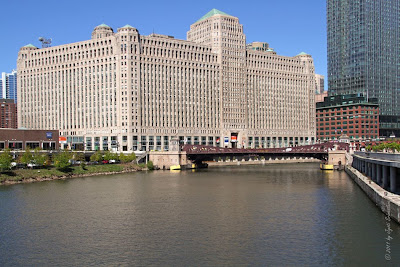