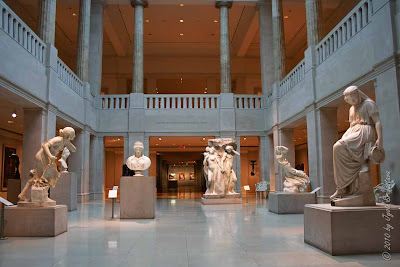 Sculpture Court at the Art Institute of Chicago [AIC] ..
Gallery 161..

As of now, my favourite place at the Art Institute is the Sculpture Court.. and I wish and intend to document all the sculptures here..
So far, this is what I have..

NEOCLASSICISM..
neoclassicism is a term used to describe works of art that are influenced stylistically or thematically by classical Greek and Roman sources. the origin of Neoclassical style lie with discovery of ancient Roman cities of Herculaneum and Pompeii, which had been buried by the eruption of Mt. Vesuvius in AD 79. The preserved cultural artifacts of these cities educated and inspired European archaeologists, artists and collectors during the first half of the 18th century.The German art historian Johann Joachim Wickelmann's extensive and enthusiastic writings about the achievements of Greek sculptors encouraged artists to pursue classical forms and ideals as well.

European and American artists adopted Neoclassicism for aesthetic and cultural reasons and the style flourished during the revolutionary periods in France and the United States. The appropriation of classical forms suggested learning, democratic values, moral virtues and a sophisticated appreciation of beauty, each considered essential components in the development of a nation. Painters, sculptors, architects and democratic artists employed simple, flowing lines, restrained ornaments and idealized figures to impart their lofty aim to the public. American Neoclassical sculptures was produced by artists such as Horatio Greenough, Hiram Powers and Harriet Hosmer, who traveled to Rome and Florence during the first half of the 19th century to study with European masters.

Artistic Training in Italy and France..
Horatio Greenough, Hiram Powers and Thomas Crawford were among the first American sculptors to have traveled to Italy in the 1830's to study Classical and Renaissance sculptures. Prior to this, the American demand for historical monuments and portrait busts was met by European masters trained in the Neoclassical style. Because of the first generation success abroad, a second group of sculptors, which included William Westmore Story, Harriet Hosmer and Randolph Rogers, moved to Italy in the 1850's. While still influenced by classical models, the younger sculptors were also inspired by literature, and they imbued their sculptures with greater degree of naturalism and drama.

By the 1850's many artists began to model first in clay and then replicate their work in bronze, a technique that produced a higher degree of modeling. French sculptors such as Antoine -Louis Barge [1796-1875] ushered in a new style that emphasized movement and vitality over the sedate and controlled manner of Neoclassicism. the Ecole des Beauz Arts in Paris soon emerged as the new center for sculptures and Augustus Saint-Gaudens and Daniel Chester French were the first American sculptors to train there. Their dynamic bronzes, which illustrate effects of light and shadow, reveal a new direction in American sculptures.
Posted by Jyoti at Saturday, June 02, 2007

Great information. I could sit in here for hours.