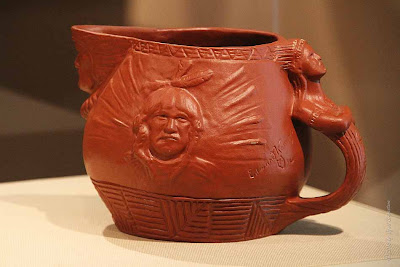 Continuing with the ongoing series on Native Americans in the art scene of Chicago..

By the end of 19th century, many artists looked towards Native Americans for artistic inspirations and images of natives emerged in unusual places, like vases, pitchers and bowls. here are some examples, from before 1900..

Personal Comment..
When I write on the topic of "Native American representation in Art Scene", I often feel I'm trivializing a profoundly ugly chapter in the country's history. Natives got a very raw deal, being offered the choice between forced assimilation and acculturation or face annihilation or seclusion. The good thing is that, people have accepted the past and moved on. Rather than ignoring the history, it's better to come in terms with it..

What I find particularly interesting is that most pieces of Public Art which deals with Natives, have shown them in good light. Except for the relief sculpture "Defence" on Michigan Avenue bridge, where Natives have been shown to be very brutal, whichever other piece that I've seen, throw positive light on them. Seems to me, that the artists displayed empathy towards Natives earlier than the general public, and I believe they significantly contributed in positively shaping and swaying the public opinion, towards Natives...