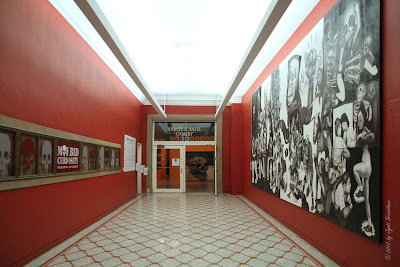 Passageway to the Sidney R. Yates Gallery, with mural "Death March", by Hugo Crosthwaite on one side, and the logo motif on the other side.. 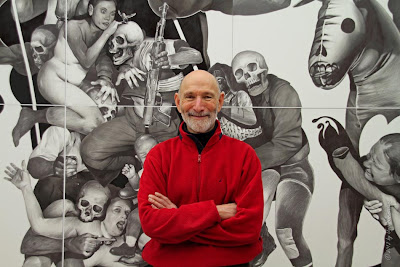 Richard Harris with the mural "Death March", by Hugo Crosthwaite..

"Death March"
by Hugo Crosthwaite.
This large 25-by-10-foot black-n-white mural, sets the tone for the exhibition. It mentally prepares one, to enter a very unusual show, where the theme is mortality.
Location: Passageway to the Sidney R. Yates Gallery..
at Chicago Cultural Center..
For the exhibition: "Morbid Curiosity: The Richard Harris Collection"
January 28 – July 8, 2012
Curator: Lucas Cowan
Co-Curator: Debra Purden
Director of Exhibitions: Dr. Elizabeth Lee Kelly..
Presented by Chicago Department of Cultural Affairs and Special Events in partnership with the Chicago Office of Tourism and Culture.. 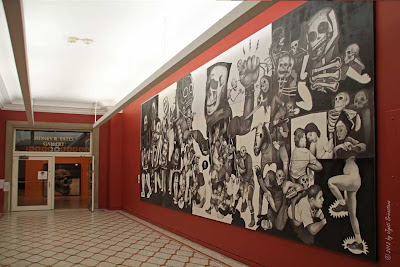 It is difficult to photograph the entire 25-by-10 foot mural. The above image is stitched from four images. It gives a good idea of the piece..

From the website Hugo Crosthwaite, click here..
Death March: Arist Statement..
This work is a death march in the tradition of funerary marches where family, friends and general onlookers follow the deceased to their final resting place. At first glance, the drawing has the appearance of a festive occasion. There is a mass of characters, clumped together in groups, supporting and carrying effigies of death; puppets and floats that resemble a South American Carnival or a Mexican Day of the Dead procession. But with closer examination, these groups are a grotesque ensemble of human and monstrous figures that inflict death upon one another through war, rape, murder and disease. There is dark humor and contemplation over the concept of an afterlife, as all the characters march forward into what is an inevitable end.

The drawing references such works as Peter Bruegel’s “Triumph of Death”, engravings by Jose Guadalupe Posada of the Mexican Revolution and James Ensor’s, “Skeletons Fighting for the Body of a Hanged Man”.

Death March has a dual narrative layer. The bottom procession is the reality of death, suffering, turmoil and physical mortality. It also reflects on the nature of mourning and the fear of an existential void after death. The top, mystical and ethereal, is composed of puppets and death effigies. It presents the more abstract notion of death, the spiritual idea of an afterlife and the hope of reuniting with the dead. 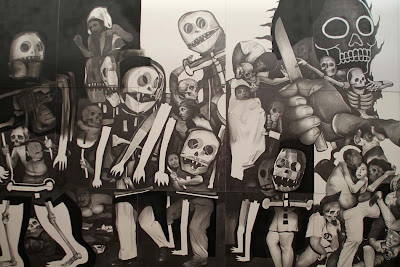 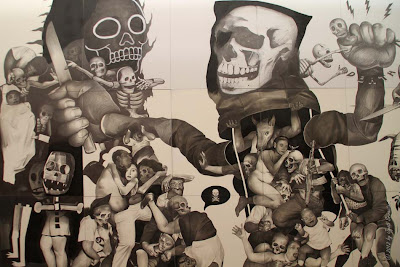 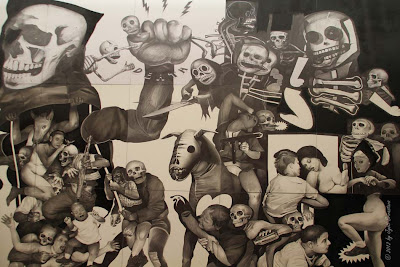 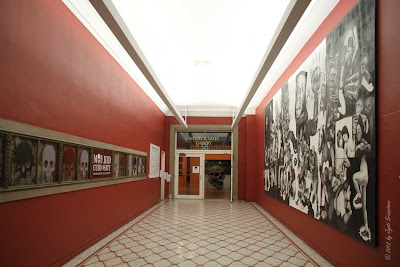 For the wonderful logo-motif on the other side of the wall, click here .. 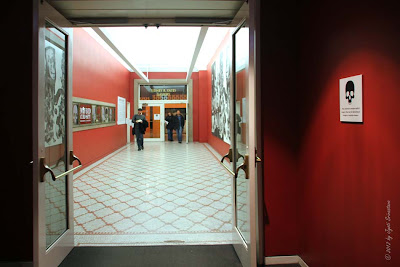