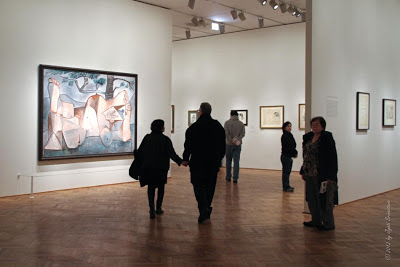 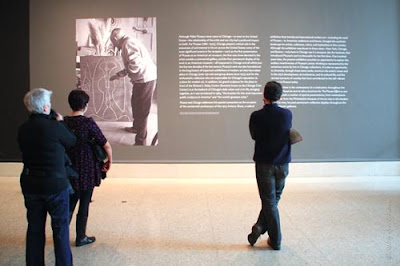 Although Pablo Picasso never came to Chicago- or even to the United States - the relationship of the artist and the city had a profound influence on both. For Picasso 1881-1973, Chicago played a critical role in his awareness of and interest in his art across the United States, some of the most significant events in his reception - such as..
- the first presentation of Chicago in an American art museum
- the first solo show devoted to the artist outside a commercial gallery, and,
- the first permanent display of his work in an American museum
all happened in Chicago and all with just the first two decades of the last century.
Picasso's work are also foundational in the long history of important exhibitions in modern art that have taken place in Chicago...
In addition his grand sculpture for the plaza in front of the Richard J. Daley Center [formerly known as Chicago Civic Center] is the bedrock of Chicago's daily urban and civic life, bringing together as it was envisaged in 1963; "the location for the most important public sculpture in America" and "the world's greatest artist".
"Picasso and Chicago" celebrates this special connection on the occasion of the centennial anniversary of the 1913 Armory Show, a radical exhibition that introduced international modern art - including the work of Picasso -  to American audiences and forever changed the aesthetic landscape for artists, collectors, critics and the institutions in this country.
The exhibition traces the evolution of the artist from his early years to his late career.
- The Early Years / Blue Period / Early Printmaking
- Rose Period / The Saltimbanques
- Cubism
- The 1920s
- Illustrations from "The Unknown Masterpiece" and "The Vollard Suite"
- The War
- Later Works, including ceramics and printmaking
A very interesting part of the exhibition is the gallery "Inside Picasso". Here we see the mystery behind some of his paintings, uncovered by various investigative techniques.
THE EARLY YEARS /  BLUE PERIOD
also early printmaking
Pablo Picasso was born in 1881, in the southern Spanish city of Malaga. While he would live most of his life in France, his early work were made in Spain. In October 1900, at the age of 19, Picasso arrived to Paris. It was during his early years that he made his first major artistic breakthrough, the paintings of his so called Blue Period. 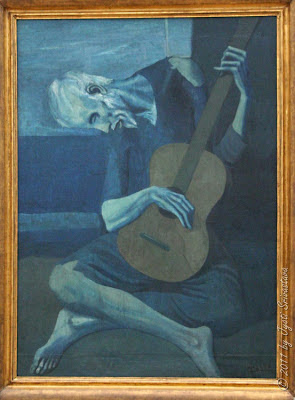 The Old Guitarist - by Pablo Picasso
[late 1903-early 1904]
Became a part of AIC collection in 1926, as a gift from Helen Birch Bartlett Memorial Collection. 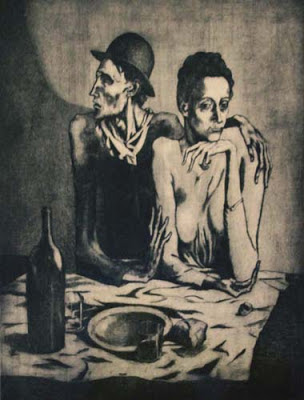 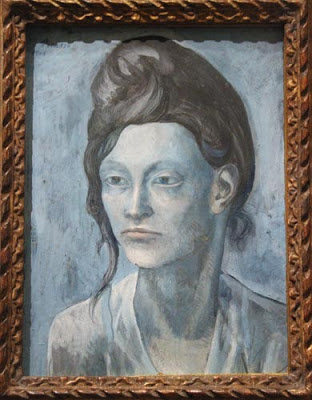 Woman with a Helmet of Hair [Paris, 1906]
After settling in Paris,  Picasso developed a relationship with a model named Madeleine, whose thin body and delicate features were the inspiration  for a number of works in the years 1904-05.
THE ROSE PERIOD
After three years of portraying the poor and needy and lonely, though, Picasso struck out in new direction. In the winter of 1904, Picasso started introducing warm colors in his painting, particularly pink, which is Rose in French. This period is called the Rose Period. In this period Picasso used warm palettes, particularly rose and painted less depressing subjects.. 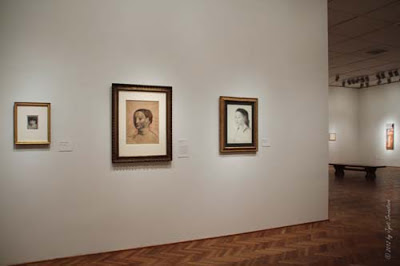 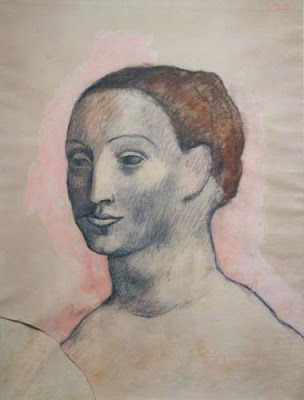 It is interesting to see the transformation in his painting from the above to the below image. The model remains the same Fernande Olivier. 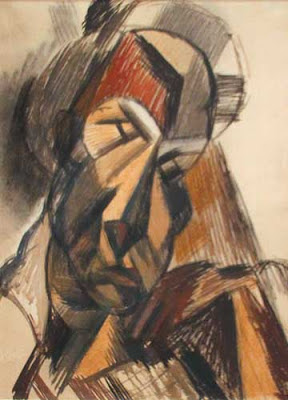 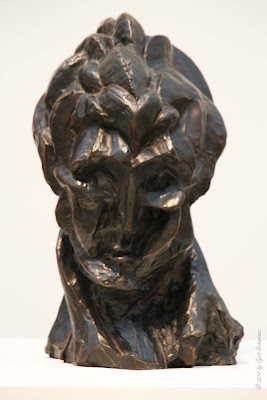 ﻿
CUBISM
Picasso met Georges Braque in 1908. Both artists began breaking up the composition into geometric shapes. Braque and Picasso, invented a revolutionary art style Cubism [1909-1919].. Paintings are broken into geometric forms and showing subjects from more than one angle .. 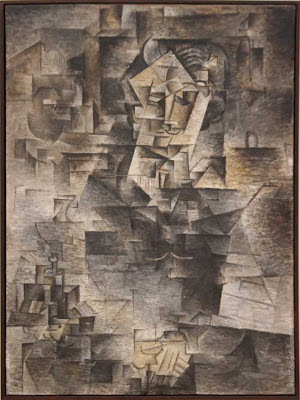 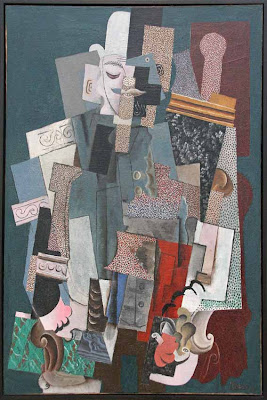 Man with Pipe / man with Mustache, Buttoned Vest, and Pipe [1915]
THE 1920s
The collaboration between Picasso and Braque was ended by the First World War. Cubism made Picasso internationally famous and lodged him in the history of art, and changed modern art itself. However, he surprised everyone by returning to conventional figural and spatial values, painting stylized, monumental, proportionally random figures that made a classical impression.  At the same time, however, he was continuing to push Cubism into new paths. 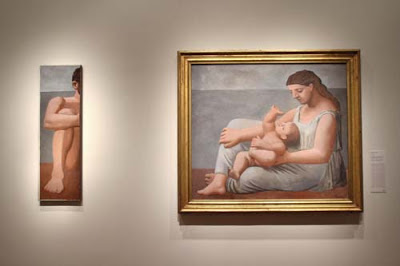 Fragment of Mother and Child - by Pablo Picasso
[Olga Koklova / 1921]
The Art Institute of Chicago, gift of Pablo Picasso, 1968. 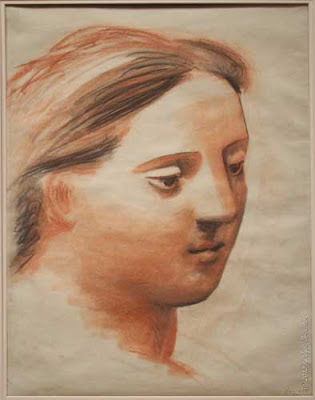 Head of A Woman  - by Pablo Picasso
[Olga Koklova / 1922]
The Arts Club of Chicago.
INSIDE PICASSO
One of the highlights is the Gallery "Inside Picasso".
To me , this was a very interesting part of the exhibition , where the mystery behind some of his paintings are uncovered, using various investigative techniques.  Like X-radiography reveals that  his iconic "Old Guitarist" has two underlying compositions: an elderly woman seated with head down and a younger woman seated with a boy and two cows.  I will cover "Inside Picasso" separately, so keep tuned. 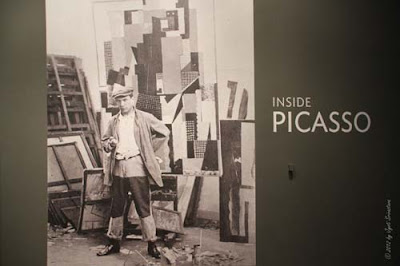 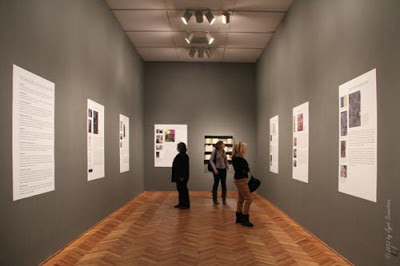 THE UNKNOWN MASTERPIECE
In 1927, Picasso was commissioned for a series of illustrations for Balzac's story " The Unknown Masterpiece"[ Le Chef-d'œuvre inconnu].  For more on this,  click here 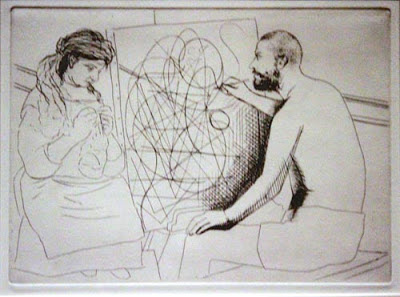 Painter and Model Knitting [From the book, "The Unknown Masterpiece"]
For more on this,  click here
VOLLARD SUITE
Produced between 1930 and 1937 [published 1950] , are about 100 etchings collectively known as the Vollard Suite, named after the publisher Ambroise Vollard.  I am especially thankful for including this in the exhibition, as I always wanted to see these, where Picasso inserted himself as the mythical Minotaur in the scenes of bacchanalian feasts with fauns and nymphs 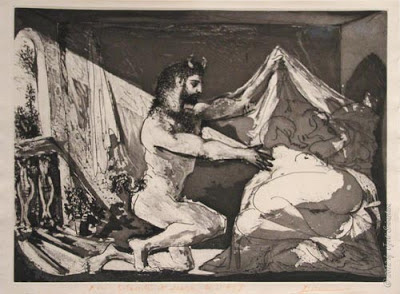 Faun Uncovering a Woman [Jupiter and Antiope, after Rembrandt]
From Vollard Suite [1936] 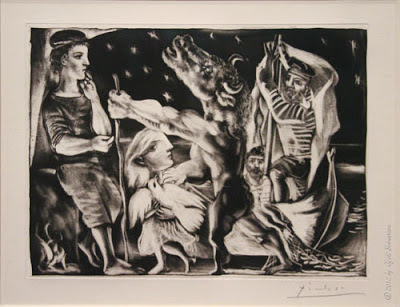 Blind Minotaur led by a Young Girl, from Vollard Suite [1934]
THE WAR
On  April 26, 1937, General Francisco's fascist forces bombed the undefended town of Guernica in northern Spain. The Spanish Republican government commissioned Picasso to create a large mural for Spanish display at the  Paris International Exposition at the 1937 World's Fair in Paris.   Picasso monumental canvas "Guernica", which reflect the horrors of civil war and the suffering it inflicts upon individuals, particularly innocent civilians.  On completion Guernica was displayed around the world in a brief tour, becoming famous and widely acclaimed. The Arts Club of Chicago was one of the venues of the tour. Guernica is now in Madrid, Spain.  Dora Maar, Picasso's companion and lover during this period,  documented the making of Guernica.  The exhibition has a few painting that Picasso made of Dora Maar.
﻿ 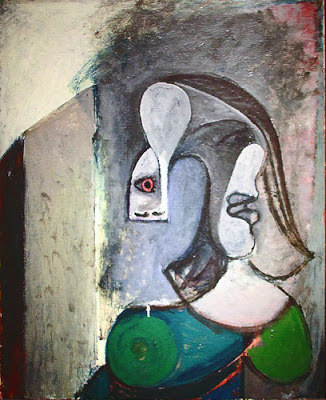 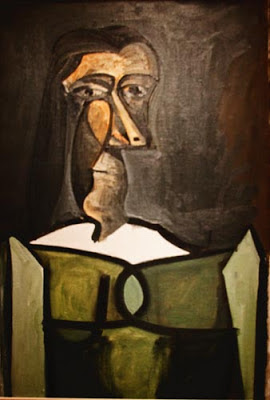 Bust of a Woman - by Pablo Picasso
[Dora Maar/1943]
Later Works / After WW-II [1946-1973]
Picasso’s final works were a mixture of styles, his means of expression in constant flux until the end of his life. Devoting his full energies to his work, Picasso became more daring, his works more colorful and expressive, and from 1968 through 1971 he produced a torrent of paintings and hundreds of copperplate etchings.. 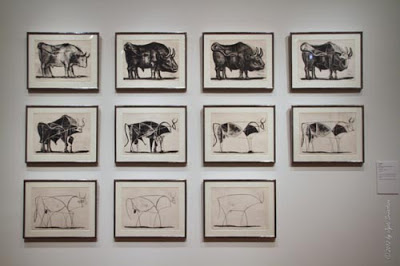 The Bull - by Pablo Picasso
Just after World War II, Picasso engaged in a flurry of printmaking activity, focused on lithography. he produced four series of images, one of which was a progression of 11 states of a print called, The Bull",  each is a completed composition in it's own right.
CERAMICS
In 1946, Picasso met the potters Georges and Suzanne Ramie, while walking the beach. This chance encounter ignited an innovative and immensely productive period of ceramic experimentation. Working closely with master potters and artisans at Madoura Pottery Studio, Picasso produced over one thousand pieces in his first year at Vallauris.  Like his previous experiences in printmaking and in design for the ballet, his techniques were experimental and unconventional. Now he molded clay into versatile objects, sometimes manipulating and reshaping forms, and he employed unorthodox combination of glazing and firing techniques in order to achieve unique painterly surfaces. The styles and subjects of these works were distinctly Mediterranean: ancient vessels such as vases, jugs and amphorae, with classical Arcadian images of  dancers and mythological animals. 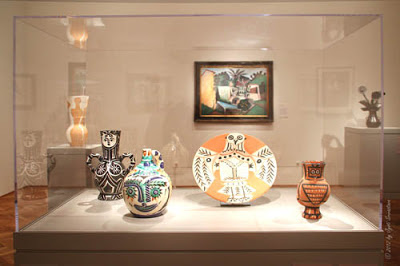 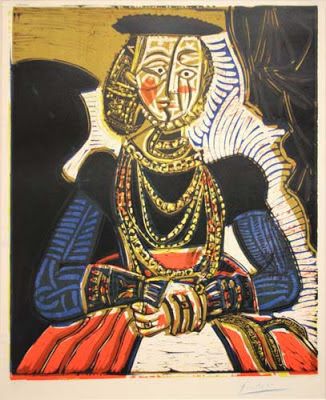 Portrait of a Woman - by Pablo Picasso
[after Lucas Cranach the Younger /July 1958]
Linocut in colors on paper. 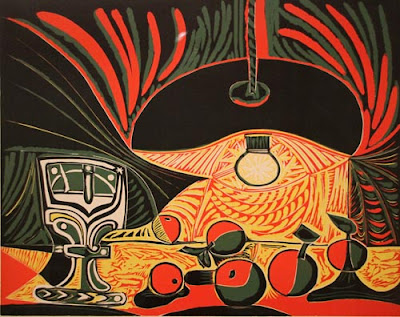 Still Life with Glass under the Lamp
March 19, 1962, published 1963
Linocut in yellow, red, green and black on paper.


Picasso met Jacqueline Roque in the summer of 1952, after she had begun work in the salesroom of Madoura Pottery studio where Picasso produced his ceramics. they had prolonged courtship that lasted through the split with Francoise Gilot in 1953, and the death of his first wife Olga Koklova in 1955. Picasso finally married Jacqueline in 1961. She offered steadfast devotion and support to the artist through the end of his life. the two were frequently photographed in the studio together. She served as a muse for many portraits and monumental nudes Picasso created in his last years.﻿ 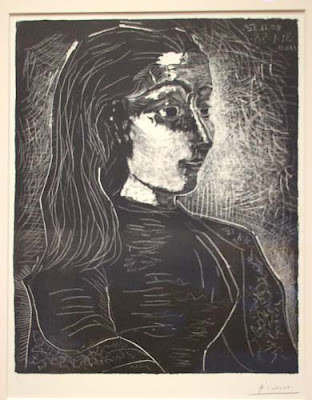 Jacqueline in profile to the Right - by Pablo Picasso
[1958] 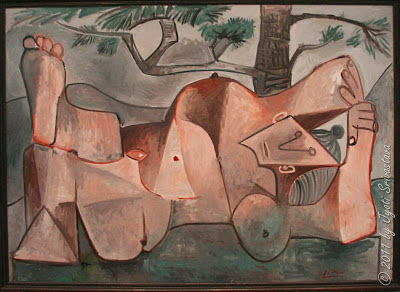 Nude under a Pine Tree - by Pablo Picasso
[Jacqueline Roque /1959] 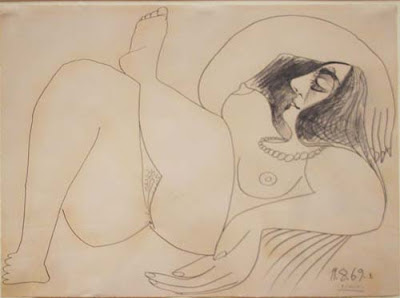 
The first monumental modern sculpture to be placed in the Loop is this sculpture, now called the "Picasso". It was unveiled in the Civic Center Plaza on August 15, 1967. The artist, Pablo Picasso left it untitled, but Chicagoans named it after the artist, calling it the "Picasso”.
﻿ 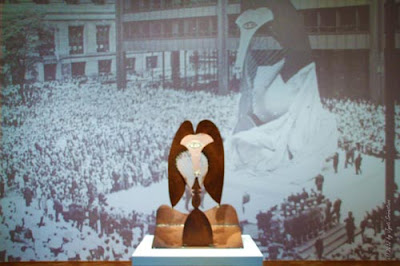 Maquette for Richard Daley Center Sculpture, 1964
[Gift of Pablo Picasso to the Art institute of Chicago]
In the background is the photograph of the unveiling of the sculpture in 1967.

An absolutely superb exhibition!!!
Go See It!!!
While there, don't miss visiting the Modern Wing, where Picasso's artwork are usually kept. In place of Mother and Child, which has temporarily been shifted to the Exhibition on the Regenstein Hall, there is a "The Three Musicians" from the Philadelphia Museum of Art.. 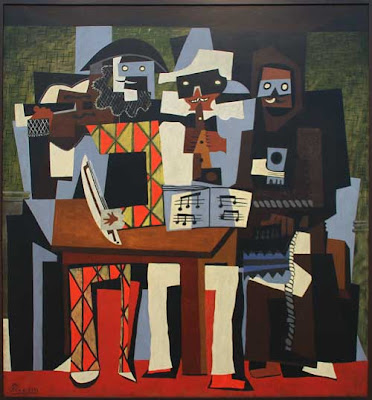 The Three Musicians - by Pablo Picasso
From the Philadelphia Museum of Art..
Posted by Jyoti at Tuesday, February 26, 2013