Riverwalk Gateway [Murals-IV: The Float Bridge and I & M Canal] - by Ellen Lanyon.. 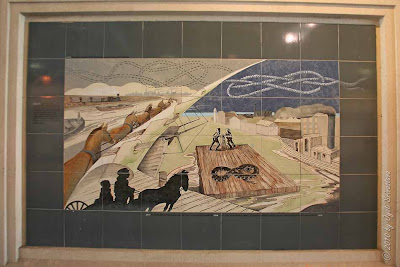 1840: The Clark Street Bridge was the first of its kind to be built. By 1848 three more were added at Wells, Randolph and Kinzie Streets. All were destroyed by the Great Flood of 1849.

Insets..
1836-48: Jolliet's dream to cut through the portage and thus create a waterway to the Gulf via the Mississippi was finally realized with the completion of the Illinois and Michigan Canal. It had required many laborers to hand dig the sixty-foot wide by six-foot deep waterway where transport barges had to be towed through the shallow waters.

1848: The Galena-Chicago Union Railroad was the first to serve Chicago.
Posted by Jyoti at Sunday, December 02, 2007