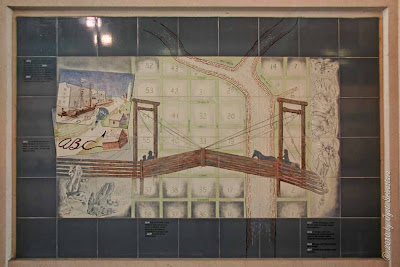 1834: The first draw bridge was built at Dearborn Street. Made of logs, it was often in need of repair and in 1839 was destroyed by irate citizens even though the City Council had already ordered its demolition.

Inset..
1833: The first school opened by Eliza Chappel on the south bank of the river, situated at what is now State Street and Wacker Drive.
1832: Due to increased lake traffic, a lighthouse was built next to the fort.
1834: The United States Army cut through a sand bar at the mouth of the Chicago river to create a better commercial harbor.
1839: The first shipment of grain left Chicago on the schooner Osceola, bound for Buffalo, New York..
Posted by Jyoti at Sunday, December 02, 2007