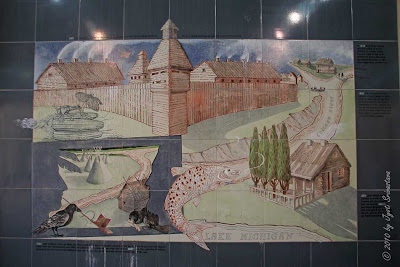 1782: Jean Baptiste Point du Sable, an Afro-French trader settled on the north bank of the river with the Potawatomi Indians and married Catherine, a member of the tribe. The couple left in 1803 when the Louisiana Purchase opened up the territory to the United States.

1804: John Kinzie, who arrived in Chicago to trade with the Indians, purchased DuSable's cabin and enlarged it for his family.

1816: The Potawatomi tribe ceded a strip of land ten miles wide on each side of the river from the river mouth to the head waters of the Illinois, giving the United States control of the portage. That same year, Fort Dearborn was rebuilt.

1818: Wolf Point Tavern was the center of social activity. Originally, it existed where the river split to the north and to the south and could be reached by canoe or the first barge ferry established on the river.
Posted by Jyoti at Sunday, December 02, 2007