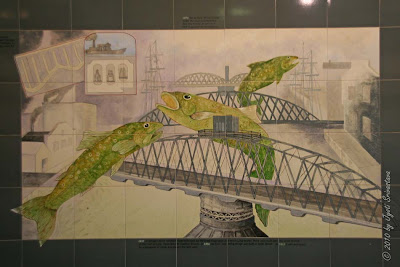 Riverwalk Gateway..
Continued from the post, Riverwalk Gateway.. click here..
Mural-V: Three Swing Bridges..
1850: All bridges which replaced those destroyed by the Great Food were wood swing bridges. Three were built over the south branch of the river at Lake, Randolph and Madison streets.

1856: The first iron swing bridge was built at Rush Street.

Inset..
1857: Plat of an Industrial Subdivision built by the Chicago South Branch Canal Company to serve the fast growing need for more dock facilities.
1871: The LaSalle Street Tunnel under the river accommodated two-way traffic as well as a well-lit pedestrian walkway.
Posted by Jyoti at Sunday, December 02, 2007