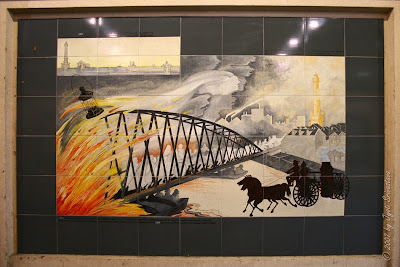 Riverwalk Gateway..
Continued from the post, Riverwalk Gateway.. click here..
Mural VI: The Great Fire..
1871: The Chicago Fire began on the southwest side of the city. Due to high winds, it swept through the entire area and to the north side. A miraculous number of citizens survived due to the bridges which allowed them to flee to safety. Many bridges were destroyed in the fire and were replaced by larger and stronger swing bridges. The Water Tower, one of the only structures to survive the Chicago Fire, has become a symbol of the "I Will" spirit that was needed to recover and to rebuild an even greater city.

Inset..
The new water works was designed by Ellis Chesbrough in 1869. The intake crib off shore in Lake Michigan supplied water via pipes to the Pumping Station and the Water Tower on Michigan Avenue.
Posted by Jyoti at Sunday, December 02, 2007