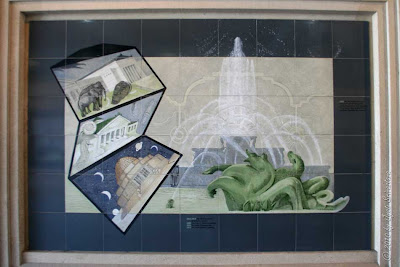 Daniel Burnham created a grand design which protected Chicago's lakefront from the industrial development typical of other waterfront cities of the world.
1909: The Burnham Plan called for parks, monuments and museums along Lake Michigan. 1926: Buckingham Fountain had been completed, and the Burnham Plan for Grant Park was well established.

Insets
Postcards show the Field Museum of Natural History, built between 1911 and 1919, followed by the John G. Shedd Aquarium in 1929, and the Adler Planetarium in 1931. Today, these three major sites in Grant Park comprise the Museum Campus..
Posted by Jyoti at Sunday, December 02, 2007