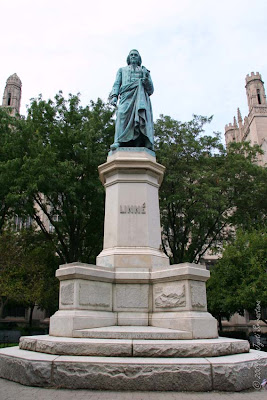 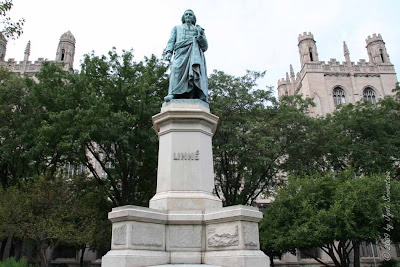 Commissioned by the Swedish community of Chicago, from 1891 the Carl von Linné statue stood at Fullerton Avenue and Cannon Drive in Lincoln Park. Transferred by the Swedish Bicentennial Commission to the Midway south of Harper Library, Sweden's King Carl XVI Gustav rededicated it, April 19, 1976.
Posted by Jyoti at Tuesday, August 11, 2009

I am the great grandson of Carl Johan Dyfverman, the sculptor of the Linné monument.

I was very happy to see the new and attractive look of Your website of Public Art in Chicago and the fine pictures of his statue.
Here in Sweden he made a lot of sculptures both in public places, on houses and a lot in churches. Actually he was the first artist in Scandinavia to work in ICE (for the benefit of the poor people in Stockholm during cold winters 1888-91)
If you want to know more we have a website with this adress:
www.cjdyfverman.se
Best regards!
Martin Dyfverman, Örebro, Sweden.

I am a Swedish-American and worked on rebuilding the Linne statue back in 1976 on the Midway at the University of Chicago. I would love to talk to you about your great grandfathers monument. My father was in charge of this Project and was born in Smoland, Sweden. Please contact me at: firebrick720@yahoo.com
Len Johnson

This was not a statue by Dyfverman. It is the work of Frithiof Kjellberg. Please see http://www.cpdit01.com/resources/planning-and-development.fountains-monuments-and-sculptures/Midway%20Plaisance/Carl%20von%20Linne%20Monument.pdf

You are right, that the original Linné statue, in Sweden, was made by the famous sculptor Kjellberg.
But when a replica was ordered for Chicago, Carl Johan Dyfverman made that.
It´s also a fact that two of the smaller bronze figures was made entirely by Dyfverman, since Kjellberg became sick. It is also argued here that D. was involved
much in the doing of the Linné statue itself.