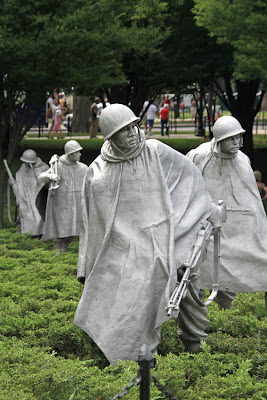 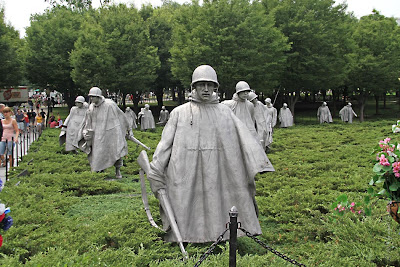 Korean War Veterans Memorial..
Sculptor: World War II veteran Frank Gaylord..
Murals of faces on the wall: Louis Nelson.
"Freedom is not free.”
Here, one finds the expression of American gratitude to those who restored freedom to South Korea. Nineteen stainless steel sculptures stand silently under the watchful eye of a sea of faces upon a granite wall—reminders of the human cost of defending freedom. The statues in the Korean War Veterans Memorial depict fighting men on patrol represent the army, navy, Marine Corps, and air force working together for a common goal - victory. All these elements point toward the Pool of Remembrance where the sacrifice of 54,246 American lives can be contemplated. It is here where an inscription summarizes the true meaning of the memorial: "OUR NATION HONORS HER SONS AND DAUGHTERS WHO ANSWERED THE CALL TO DEFEND A COUNTRY THEY NEVER KNEW AND A PEOPLE THEY NEVER MET." 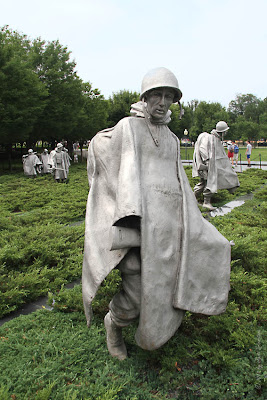 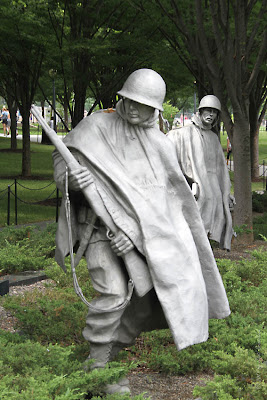 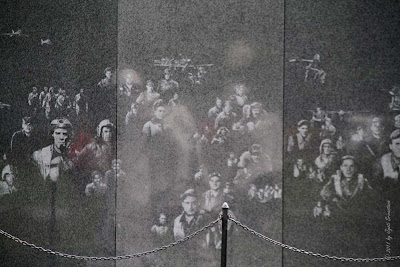 Sea of faces on granite wall, reminders of the human cost of defending freedom..