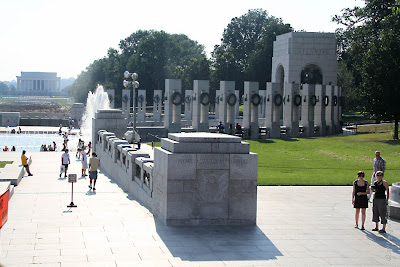 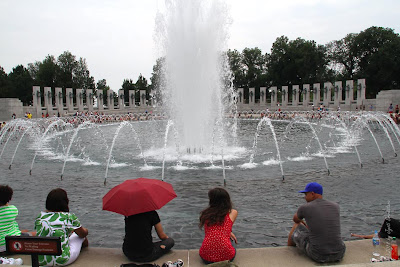 National World War Two Memorial..
The World War II Memorial honors the 16 million who served in the armed forces of the U.S., the more than 400,000 who died, and all who supported the war effort from home. The Second World War is the only 20th Century event commemorated on the National Mall’s central axis.
Open to public: April 29, 2004
Dedicated by President George W. Bush on May 29, 2004 [Two days before Memorial Day] 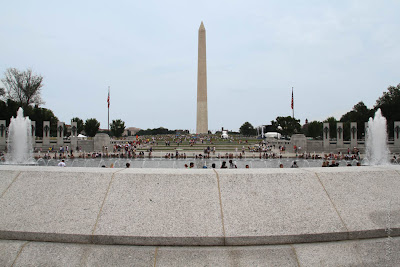 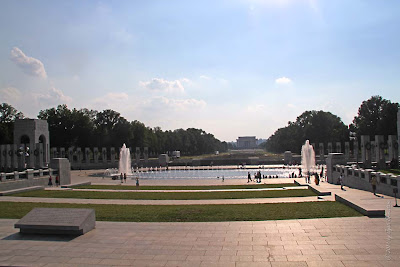 Inscription:
Here in the presence of Washington and Lincoln, one the Eighteenth Century Father and the other the Nineteenth Century Preserver of our Nation, we honor those Twentieth Century Americans who took up the struggle during the Second World War and the made the sacrifieces to perpetuate the gift our forefathers entrusted to us, a Nation conceived in Liberty and Justice. 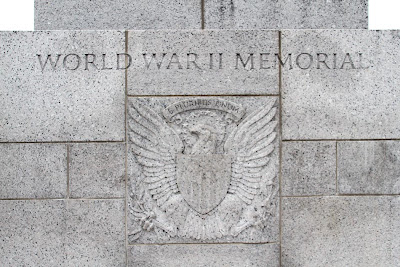 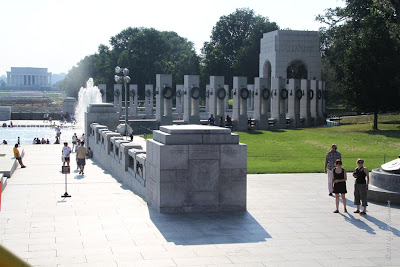 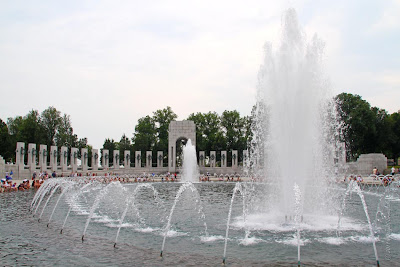 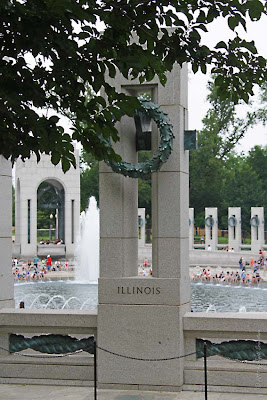 The Memorial consists of 56 pillars..
From the official website..
There are two wreaths for each pillar; one on the front and one on the back. Each pillar has both, but they alternate from side to side for variety. The wheat wreath represents agriculture and the oak wreath represents industry. This symbolizes the fact that not only did the states and territories give their citizens to serve in the military, they also offered their resources and the fruits of their labor to the cause of victory. Without the hard work, sacrifice, and support of the home front, success on the battlefront was impossible. 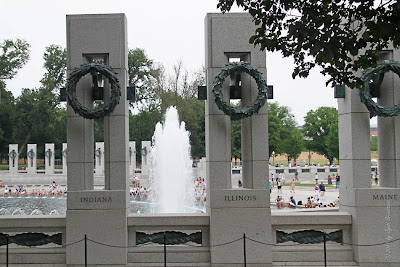 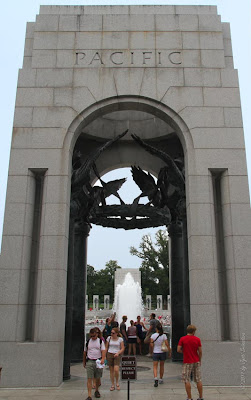 Pacific Pavilion.
On the other side is the Atlantic Pavilion..
From the official website..
Why are the two pavilions marked Atlantic and Pacific?
During World War II, U.S. military forces fought in two military theaters of operations on opposite sides of the world. Navy ships zigzagged their way across the Atlantic to transport Army and Marine personnel to fight in Northern Africa and Europe against the Germans and the Italians. Likewise, Army, Navy, and Marine units fought a brutal island-hopping campaign across the Pacific against the Japanese. The two forty-three foot tall victory pavilions honor their heroic service and ultimate success and list at their bases many of the major campaigns and battles from each theater of war... 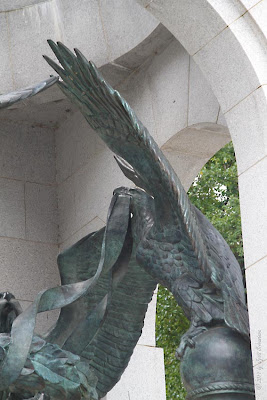 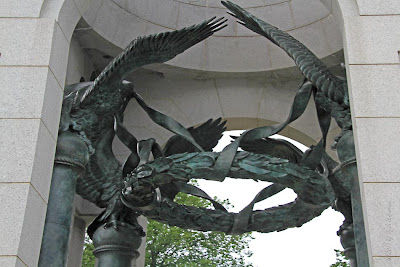 Baldacchino Sculpture..
From the official website..
Inside each victory pavilion is a sculptural canopy called a baldacchino. These baldacchinos are actually four eagles holding a laurel victory wreath suspended above an enlarged victory medallion set into the floor below. The eagle is the symbol of the United States of America. The laurel wreath is a symbol of victory going back to ancient Greece. So, the sculptures symbolize American victory in the Atlantic and in the Pacific theaters. The eagles have wingspans of 11 feet and are perched on columns 18 feet tall. Each of the laurel wreaths weighs 5,000 pounds and was designed by Ray Kaskey of Maryland. 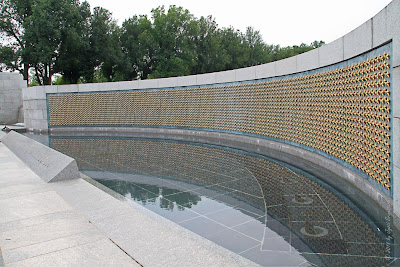 Freedom Wall – Field of Gold Stars..
From the official website..
There are 4,048 gold stars; each one represents 100 American military deaths. That means that more than 400,000 soldiers, sailors, marines, airmen, and military personnel lost their lives or remain missing in action in World War II. Of 16 million men and women in military service during the time, that number represents 1 death out of every 40. When an American went off to fight, the family often displayed in their window a flag bearing a blue star on a white field with a red border. If one of those dreaded telegrams arrived informing them of their family member's death, they would replace the blue star with a gold one; revealing that family’s sacrifice. “Here We Mark The Price Of Freedom” is inscribed below the Freedom Wall... 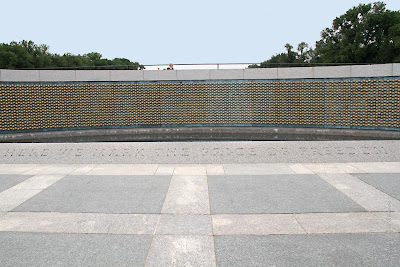 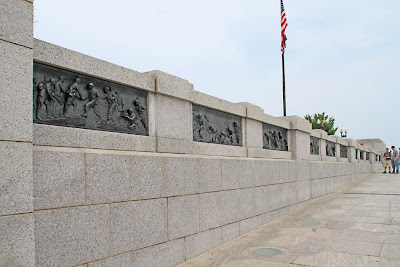 Bronze Bas Relief panels..
From the official website..
There are 24 bronze bas relief panels flanking the formal 17th Street entrance to the memorial. Each panel measures two feet tall by five feet long and was designed by Maryland artist Ray Kaskey. Twelve scenes from the homefront and the Pacific Theater are displayed on the south walk and twelve scenes from the homefront and the European Theater are along the northern walk. Descriptions and explanations of the sculptures are available as handouts at the World War II Memorial visitor contact station located along Home Front Drive..

More from the Official Website..
What are the construction materials?
The World War II Memorial is a predominantly granite structure. Almost 17,000 individual stones make up the memorial. The stones found in the vertical pillars and pavilions are Kershaw Granite from South Carolina. The horizontal paving stones are Green County Granite from Georgia. The accent stones in the Memorial Plaza are Rio Verde and Moss Green from Brazil. The coping stone around the Rainbow Pool is Mount Airy from North Carolina and the pool tiles are Academy Black from California. All of the metal sculptural devices are bronze, with the exception of the stars, which are stainless steel with gold plating.

Who was Kilroy?
“Kilroy was here”, accompanied by a cartoon drawing of a man looking over a wall, was a popular piece of graffiti drawn by American troops in the Atlantic Theater and then later in the Pacific Theater. It came to be a universal sign that American soldiers had come through an area and left their mark. Its origins most likely come from a British cartoon and the name of an American shipyard inspector. The myths surrounding it are numerous and often center on a German belief that Kilroy was some kind of superspy who could go anywhere he pleased. There are two Kilroys hidden in the memorial. You have to find them yourself!..
[Wish I knew this before my visit - would have loved to indulge in some treasure hunting]..

Did You Know?
The enormously popular “Kilroy Was Here” graffiti of the Second World War, likely originated with James J. Kilroy, a ship inspector at the Fore River shipyard in Quincy, Massachusetts, who would sign his completed work with his famous cartoon signature.