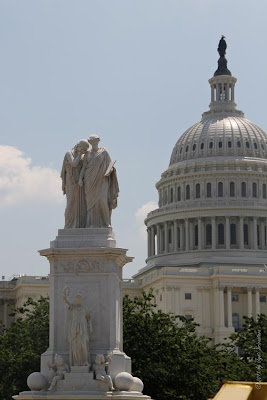 Peace Monument..
Also known as the Naval Monument or Civil War Sailors Monument, commemorate the naval deaths at sea during the American Civil War.
Erected in 1877-1878..
Sculptor: Franklin Simmons
Location: It stands on the grounds of the US Capitol, in Peace Circle at First Street, N.W., and Pennsylvania Avenue, Washington, D.C.
Today it stands as part of a three-part sculptural group, which includes James A. Garfield Monument and the Ulysses S. Grant Memorial. 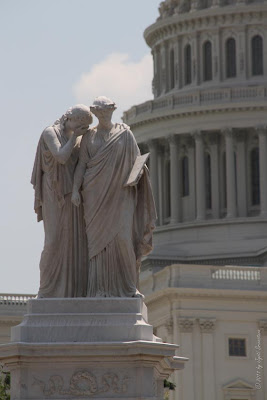 Allegorical figures Grief and History..
From the website, Architect of the Capitol, click here..
At the top of the monument, facing west, stand two classically robed female figures. Grief holds her covered face against the shoulder of History and weeps in mourning. History holds a stylus and a tablet that was inscribed "They died that their country might live." 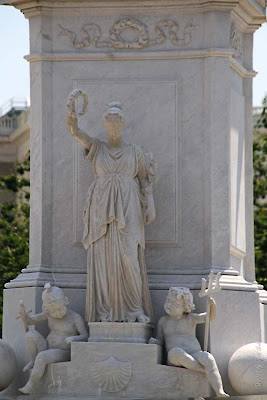 Allegorical figue Victory, with infants Mars and Neptune..
From the website, Architect of the Capitol, click here..
Below Grief and History, another life-size classical female figure represents Victory, holding high a laurel wreath and carrying an oak branch, signifying strength. Below her are the infant Mars, the god of war, and the infant Neptune, god of the sea. The shaft of the monument is decorated with wreaths, ribbons, and scallop shells. 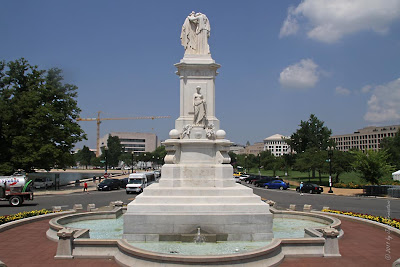 Facing the Capitol is Peace, a classical figure draped from the waist down and holding an olive sprig. Below her are symbols of peace and industry. A dove, now missing and not documented in any known photographs, once nested upon a sheaf of wheat in a grouping of a cornucopia, turned earth, and a sickle resting across a sword. Opposite, the symbols of science, literature, and art (including an angle, a gear, a book, and a pair of dividers) signify the progress of civilization that peace makes possible.

At the corners of the monument, four marble globes are visually supported by massive brackets. The fountain below, with a jet on each side, empties into a quatrefoil-shaped basin.

Inscribed "In memory of the officers, seamen and marines of the United States Navy who fell in defense of the Union and liberty of their country, 1861-1865," this sculptural group has also been called the Naval Monument.

This is really a great read for me. Thank you for publishing articles having a great insight stimulates me to check more often for new write ups. Keep posting!

it is fabulous to have some great and awesome blog! I was like geez! Can’t wait to share this blog site to my friends the contents are very informative and useful.

Oh my goodness! an incredible article dude. Thank you Nonetheless I am experiencing challenge with ur rss . Don’t know why Unable to subscribe to it. Is there anyone getting an identical rss drawback? Anybody who knows kindly respond. Thnkx gsn casino games

Very interesting information, may be useful for everything