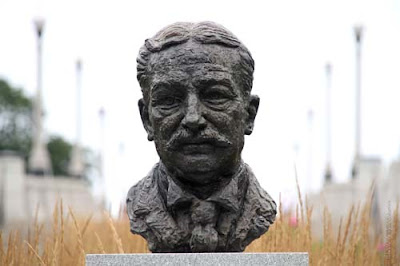 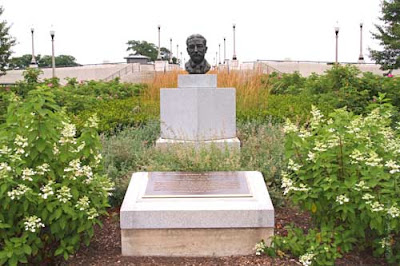 In 1872, Aaron Montgomery Ward establishes the nation's first mail-order business at Clark and Kinzie Streets. The first catalog consisted of a single-sheet price list offering 163 items. The company adopts the slogan "Satisfaction Guaranteed." In fact, he was the first retailer in the United States to guarantee satisfaction to his customers. By 1904, the catalogs weighed a hefty four pounds each and were mailed to three million customers.

His other great contributuion was fighting for Chicago's open front yard ... After the "Great Chicago Fire", when massive reconstruction projects were undertaken in the city, there were plans of making large buildings in the Grant Park area. But then there were objections ... especially by Aaron Montgomery ward .... For about 20 years of battle, he won the case as in 1911 the Illinois Supreme Court ruled that the Grant Park would remain "forever open, clear and free." 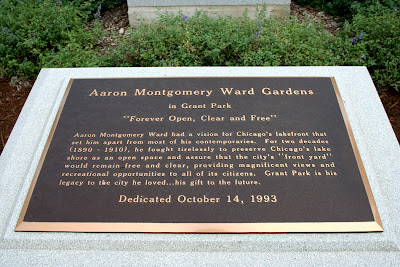 Aaron Montgomery Ward Gardens
in Grant Park
Forever Open, Clear and Free
Aaron Montgomery Ward had a vision for Chicago's lakefront that set him apart from most of his contemporaries. For two decades [1890-1910], he fought tirelessly to preserve Chicago's lakeshore as an open space and assure that the city's "front yard" would remain free and clear, providing magnificent view and recreational opportunities to all its citizens . Grant Park is his legacy to the city he loved, his gift to the future.
Dedicated October 14, 1993. 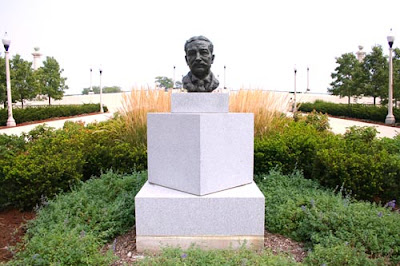 The Aaron Montogmery Ward Bust is a smaller version of the original Milton Horn , which is a part of the Merchandise Mart Hall of Fame, 2008.