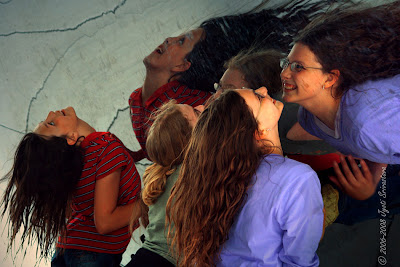 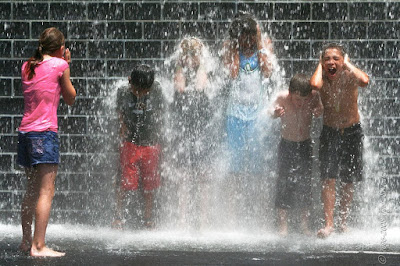 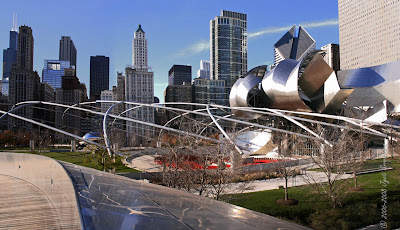 A view of the "Pedestrian Bridge" with "Pritzker Pavilion" in the background, Millennium Park ...

Conceived in 1997, Millenium Park was officially opened in July 2004. It occupies about 24.5 acres in the northwest corner of Chicago’s Grant Park [319 acres].

This park is actually a garden on a roof-top. It was built to cover railway lines and automobile garage that provided an unpleasant view of the city ... Now it's one of the most ultra modern and interactive parks in the world with state-of-the-art fountains, musical theater, garden and pleanty of space to relax and unwind in the heart of the city ... Few of the outstanding features of this park are ...

Cloud Gate/ The Bean - by Anish Kapoor
one of the most popular outdoor sculptures of Chicago .. It's called Cloud Gate since a large portion of this sculpture reflects the sky ... However, Chicagoans call it the Bean ... since it looks like a giant mercury jellybean. This elliptical sculpture is actually a seamless series of highly polished stainless steel plates, inspired by liquid mercury.
# For more, click here...

Jay Pritzker Pavilion - by Frank Gehry
One of the "most sophisticated outdoor concert venue of its kind in the United States" ... The pavilion boasts of the first outdoor LARES system permanently installed in the US. LARES is an acronym for an acoustical enhancement …“Lexicon Acoustic Reinforcement and Enhancement System”. It generates the reflected and reverberant energy that enables all the audience members throughout the Pavilion to experience that same sound quality ...
# For more, click here..

Crown Fountain - by Jaume Plensa ..
This fountain is a modern interpretation of the traditional gargoyles in fountains, where faces of mythological beings were sculpted with open mouths to allow water, a symbol of life, to flow out ... These two towers project video images from a broad social spectrum of Chicago citizens ...
# For more, click here..

BP Pedestrian Bridge..
Named for energy firm BP, which donated $5 million toward its construction, it is the first Gehry-designed bridge to have been completed..
This 925-foot stainless steel "pedestrian" bridge is located at the far east section of Millennium Park connecting it to the "Daley Bicentennial Plaza".
# For more, click here.. 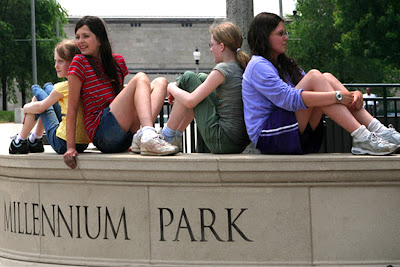