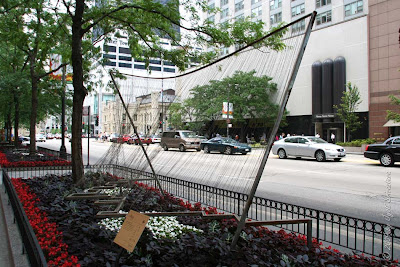 Fabric of City Life: A Reflection on The Emerald Necklace ..
By - OWP/P
Location: 730 N. Michigan Avenue ..
The marker reads ...
Daniel Burnham's transformation of swampland into beautiful Chicago parks and boulevards that encircle the city is known as the Emerald Necklace. This piece reflects the formation of the necklace .. 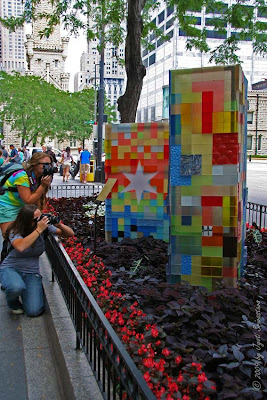 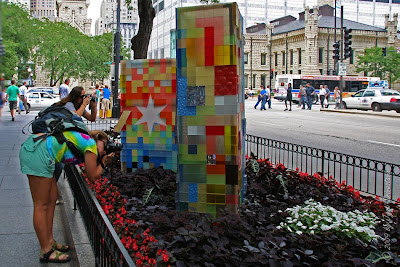 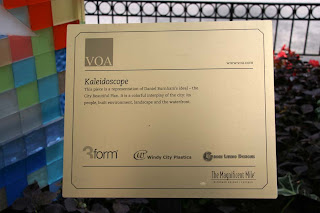 The marker reads ..
This piece is a representation of Daniel Burnham’s ideal – the City Beautiful Plan. It is a colorful interplay of the city: its people, built environment, landscape and the waterfront .. 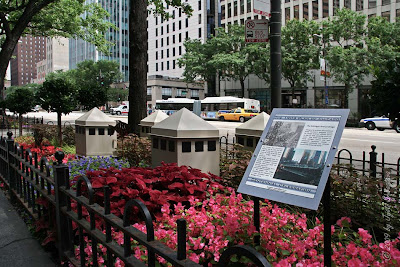 The marker reads ..
The Michigan Avenue Bridge ..
Designed by architect Edward Bennett, Daniel Burnham's dedicated partner, the Chicago Landmark officially opened on May 14, 1920, connecting north with south. Pine Street was renamed North Michigan Avenue and soon commercial developers created a prestigious community that attracted people from all over the world.

In the garden the bridge demostrates it's importance as a major connection piece for Michigan Avenue ...

On the other side the marker reads ...
The Magnificient Mile ..
The plan of Chicago was the first mention of what was to become The Magnificient Mile, Daniel Burnham felt the need for a world-class boulevard in which he envisioned a highly experiential tree lined street with the excitement of high quality retail and hospitality.

The avenue was constructed in the 1920's. It required the widening and straightning of former Pine Street north of the river, which were lined with warehouses and factory buildings near the river and large mansions and row houses as it passes through the neighborhoods of McCormickville and Streeterville. The widening required the city to purchase a total of fifty-one properties. However the Chicago Plan Commission boasted that the 16 million spent on Michigan Avenue had already paid for itself over in increased property value by 1925.
- Encyclopedia of Chicago

your blog is great thanks for sharing john dutton quilted vest