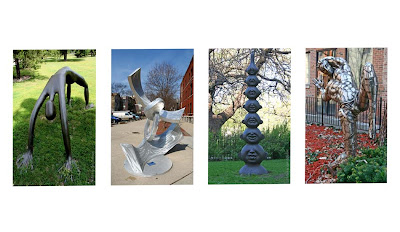 The Lakefront Sculpture Exhibit is a privately funded, not-for-profit corporation. Sponsors from the community contribute financially, serve on the jury and attend related events. Their commitment to providing our neighborhood with this unique form of beautification makes this event possible every year and we could not do this without their support.

The "Lakefront Sculpture Exhibit" started in 2002 ...
Each year, there are 20 large-scale sculptures on display throughout the 43rd and 44th Wards, extending from Burton on the south to Irving Park on the north and from the lakefront to Southport. The display is from spring of one year to spring of the next year ... The theme changes each year ... Every piece is available for sale at the conclusion of the show.

This year, 2009, the theme was our relationship with the environment .. The artists take us into a world of abstraction and treat us to unexpected colors. These pieces demonstrate the wide variety of styles that are possible by creating three dimensional art ..

I have put images of some of these sculptures in my blog..