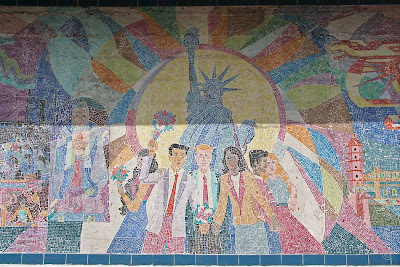 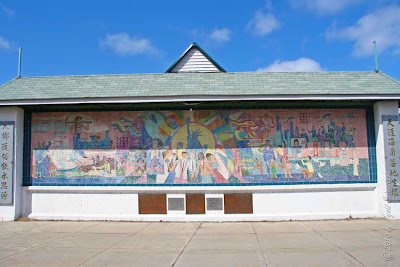 The plaque reads..
Chinese in America..
Facts of the Mural..
The mural was designed by the Chinese Artists Zhaou Ping and Yan Dong.It measures 8 feet high by 38 feet wide, and is comprised of approximately 100,000 separate small mosaics tiles. Production by Tang Shan Art and Industry Factory in Tang Shan.PRC took three months to complete. The Mural was then dismantled and shipped to Chinatown Square, where it was reassembled on site before being transferred to the Mural Wall. The Chinese American Development Corporation expresses most sincere gratitude to Zhou Ping and Yan Dong who donated their services to design and assemble this mural in Chinatown Square.
Dedicated Jan 23, 1993.


The plaque reads..
Chinese in America..
The mural is a pictorial representation which traces the history of Chinese Americans in the United States. In the 1800's out first immigrants greatly contributed to the growth of our nation, labouring under very adverse conditions to help build the railroad from West to east. the perseverance, determination, resiliency and hard work ethics, sustained these early immigrants through half century of exclusion, ridicule and discrimination. They endured as new arrivals brought to America their great agricultural skills and introduced American to Eastern Culture and many new exotic foods and art. Eventually, they became entrepreneurs, owing laundries, restaurants and grocery stores.

Today, the new generation combines their traditional Chinese Culture with Modern Western Concepts to establish themselves in mainstream America working alongside with people of all ethnic cultures in the great nation of ours. Now Chinese Americans can be seen making his/her contributions in all walks of life including Sciences, Medicine, Business, Art, Education and yes, even Politics. We take great pride in their progress from Common Laborer to Business Executive, Student to Nobel prize Winners, Precinct Captain to U.S.Senator. We hope that this mural will further challenge our future generations to even greater achievements. 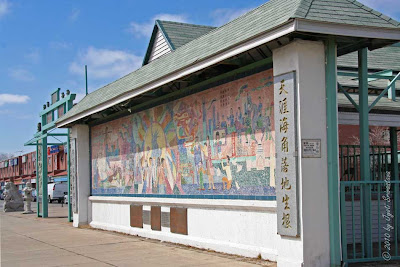