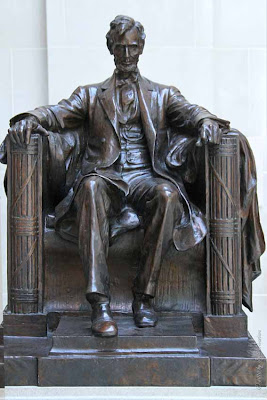 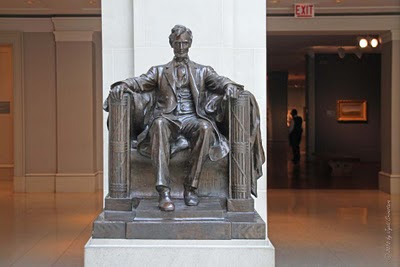 The marker reads..
Lorado Taft paid tribute to Daniel Chester French as "the dean of American sculptures". French specialized in large-scale marble statues, private memorials and portrait busts. here the sculptor captured Abraham Lincoln in a difficult hour of decision, and the president's expression is more serious and thoughtful than in French's earlier bronze of the standing Lincoln [on view in Gallery 171].. This bronze is a reduced version of the full size statue in the Lincoln Memorial in Washington D.C., which French worked with architect Henry Bacon. Daniel Chester French's brother William M.R. French was the first director of the Art Institute [1879-194]..

Also check out the other sculpture of ..
Abraham Lincoln.. [By Daniel Chester French].. click here..