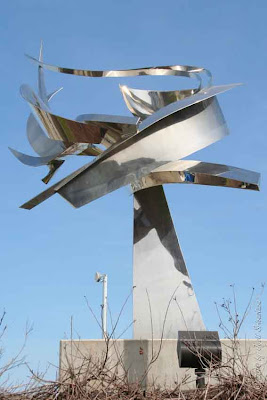 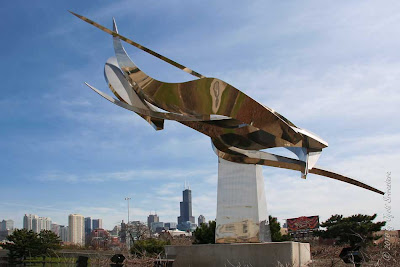 Flame of the Millennium..
By Leonardo Nierman
Dedicated: December 2002
Description: 7-ton, 25 feet high..
Location: Between the Kennedy Expressway and the Ohio Interchange, near downtown Chicago.
It is part of Chicago Gateway Green Project..
Installation and production costs were underwritten by Alper Services.. 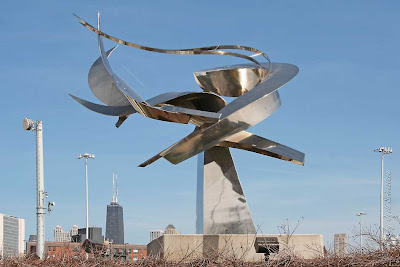 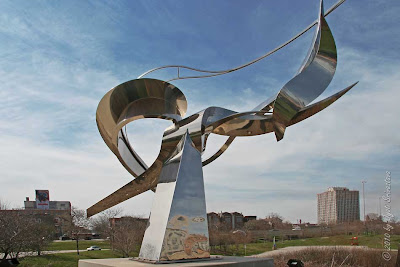 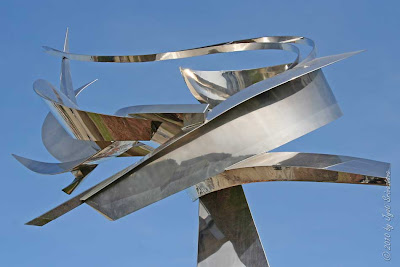 "The piece represents a flame in the wind, as the source of light bringing wisdom and clarity in the new millennium."

Flame of the Millennium.. is part of the Chicago Gateway Green Project..
Chicago Gateway Green was founded in 1986 to benefit the environment and improve the quality of life for millions of Chicagoland residents and annual visitors. It is dedicated to greening and beautifying the regions expressway, gateway and communities..Chicago Gateway Green hosts its trademark fundraising event, "The Green Tie Ball", each September..

Chicago Gateway Green is spearheaded the International Sculpture Exchange Program, in conjunction with the Chicago Sister Cities International and the City of Chicago Public Art Program..

My Special Thanks to Terry Karpowitz..
without whose help, it would not have been possible for me to take these images... As we were crossing through the Kennedy Expressway, I told him that I could never take it's photographs, because it was so inapproachable, in the middle of expressway.. He turned his truck back and parked it so that I could shoot! Also worth mentioning is that he was involved with the installation of this sculpture..
For sculptures by Terrence Karpowitz..click here ..
Posted by Jyoti at Thursday, April 01, 2010