My all-time favourite artist is Palbo Picasso..
And when talking about Picasso, one cannot help observing the women in his life. He had number of muses and mistresses and he married two of them. He has often been called a “Bohemian Casanova". Women were a driving force behind his creative work. But then, he always left them, heartbroken, for another muse/mistress and most of his women ended with tragic lives..

While some artists like Degas, had a reputation of being very detached and aloof from his models, Picasso had very passionate relations with his muses. Luckily at the Art Institute of Chicago [AIC], we have paintings of most of the women in the life of Picasso. Here's some of them. All the paintings, in this post, are from the Modern Wing galleries at the AIC..

Let me begin with a quote from his granddaughter..
“Sexually precocious, artistically precocious, Picasso must have been to his last breath the Minotaur who floors the Female after having overcome her, bound her and seized her in his carnal embrace. The conquering male, he penetrated her, an open window or narrow doorway…”
- Diana Widmaier Picasso, granddaughter of Pablo Picasso..
Diana Picasso was daughter of Maya, who was the daughter of Marie-Therese Walter. 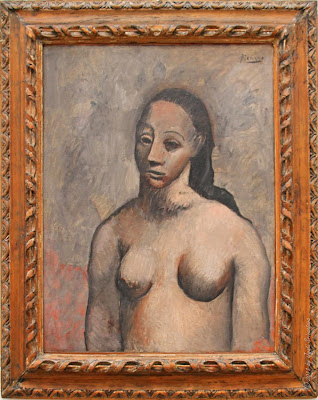 This painting Half-Length Female Nude [1906] is of Fernande Olivier..
Fernande Olivier was Picasso's first love. His Rose Period paintings are of Fernande. He met her in 1904 and although she was already married, she stayed with him for six years, till 1912. Picasso became increasingly possessive and stopped her from modeling for others and sometimes even locked her when he went out. She left him in 1912, when Picasso started taking interest in another woman named Eva Gouel. But she was never able to get over Picasso. She published a memoir in 1988, "Loving Picasso".

Eva Gouel..
Picasso's affair with Eva was short-lived, as she died early in 1915, from tuberculosis. 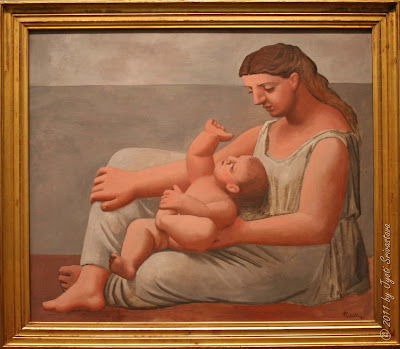 This painting Mother and Child [1921], is of Olga and their son Paulo..
Olga Koklova..
Picasso met her in 1914. She was a Russian ballet dancer and high society girl. Picasso married her in 1918, and she became his first wife. In 1921, they had a son Paulo. Picasso became a father at the age of 40. He was very proud and made a lot of portraits of Olga and Paulo. But he soon lost interest in Olga. She liked expensive restaurants, receptions, and balls of the Paris upper classes, and Picasso liked his Bohemian ways. In 1927, he met his next muse-mistress Marie-Thérèse Walter. However, Picasso never divorced Olga and she remained his official wife until her death of cancer in 1955. 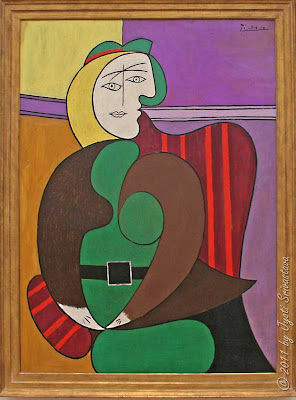 The Red Armchair.. [1931] shows Marie-Therese Walter..
Marie-Theresa Walter..
Picasso met Marie Theresa Walter in 1927, when she was 17 years old. They had a daughter Maya, in 1935. When Olga [still married to Picasso] came to know about Marie's pregnancy, she left him. But Olga, never actually got over him, and is said to have stalked his mistresses. But then Picasso left Marie too, for Dora Maar, and that was just a year after their daughter Maya was born. But Marie too, could never get over him, and four years after Picasso died in 1977, she hanged herself in the garage of her home.

Unfortunately missing from AIC are paintings of two of Picasso's muse-mistresses Dora Maar and Francois Gilot..
Dora Maar..
Perhaps one of his most famous mistresses. When they met, she was 29 years old and an artist in her own right, a photographer. She was with Picasso during his most famous painting, "The Guernica". She documented it step-by-step, photographing it, through it's various stages of evolution, detailing all the revisions and rearrangement of the painting. Her features appear in the painting. But then Picasso left Dora for Francoise Gilot. Dora is said to have been suffering from metal health problems. Picasso, usually portrayed Dora as a weeping woman.
Trivia: Painting "Dora Maar with Cat" [1941], is the third most expensive painting ever sold. It fetched 95.2 million in the auction at Sotheby’s, dated May 3rd, 2006.
Ref: Most interesting facts, click here..

Francois Gilot..
When their affair begun when she was 23 and he was 62. Their relationship lasted about ten years and they had two children, Claude [1947] and Paloma [1949]. However, Francois left Picasso for his unfaithfulness and domineering nature. Perhaps the only Picasso's woman who could get over him and get on with her life. In 1970 she married American physician-researcher Jonas Salk. 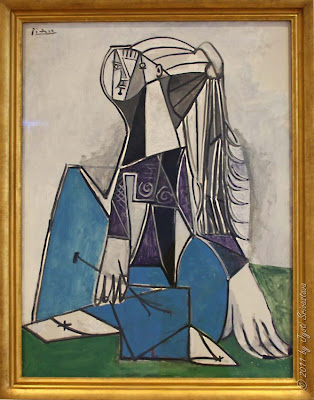 Portrait of Sylvette David [1954]..
Sylvette David..
Perhaps his only muse with who Picasso had a platonic relationship. She was only 17 when he met her. She was inspired by the artist and is a painter herself. She later married and moved to England with her husband. She was reluctant to capitalise on the instant celebrity she had found as the painter's muse, and so initially began signing her work under her married name Lydia Corbett. 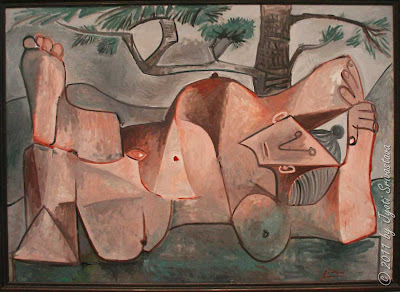 His painting, Nude under a Pine Tree.. [1959] is of Jacqueline Roque..
Jacqueline Roque..
In 1961, she became Picasso's second wife [she was 35 and he was 79]. Picasso created more work of Jacquiline, then any other. She stayed with Picasso for the rest of his life. When Picasso died, she prevented Picasso's children Claude and Paloma from attending his funeral. Jacqueline died from shooting herself in 1986.

This post is obviosly heavily referenced..
Sources:
# Picasso's womanizing: a trajectory of his women ..
# The Women of Pablo Picasso..
# The Woman behind Picasso..
# Picasso's muse steps out as an artist..
Posted by Jyoti at Tuesday, July 13, 2010