The Nathan Manilow Sculpture Park [NMSP] is spread over more than one hundred acres of prairie landscape on the Governors State University Campus. The collection was established in the late 1960s by Lewis Manilow, a developer who was committed to the economic, educational and cultural development of the south metropolitan region.

There are 26 large-scale sculptures on display. These are subdivided into North Trail and South Trail..I begin with the North trail.. 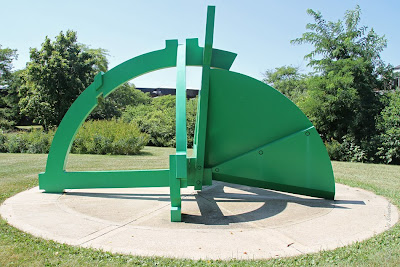 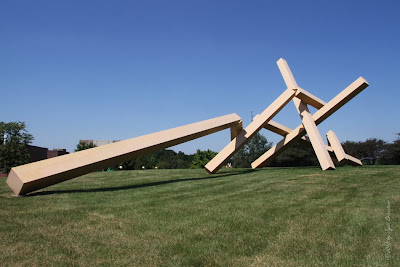 Illinois Landscape No. 5 [1976]
Artist: John Henry (American, b. 1943)
Materials: welded and painted steel
Commissioned by the Governors State University Foundation with assistance from the National Endowment for the Arts.
The marker reads..
This sculpture, which measures 134 feet in length, is typical of John Henry's work. Through the careful arrangement of simple forms and with great attention to angles of incidence and visual weight, the artist has created a structure which seems, from a distance, to dance effortlessly across the landscape. But it is also an interactive work, so large the viewer can enter it, move easily between its monumental components observing the play of light and shade - experiencing the work from both the inside and out... 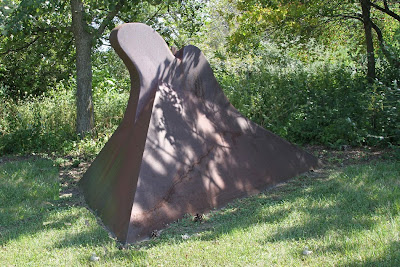 Outgrown Pyramid II [1973]..
Artist: Richard Hunt (American, b. 1935)
Materials: cor-ten steel
Gift of Morris Lipschultz ..
Its companion piece, Large Planar Hybrid is part of the Nathan Manilow Sculpture Park collection..
The marker reads..
Outgrown Pyramid II reflects Hunt's unique vision and mature style. Here, he has combined elements of biomorphic and geometric abstraction. However, unlike Large Planar Hybrid, which provides the viewer with images of birds, this earlier work seeks a purely abstract formal resolution between the sweeping steel wave cresting the work and the immobile stability of its pyramid form below... 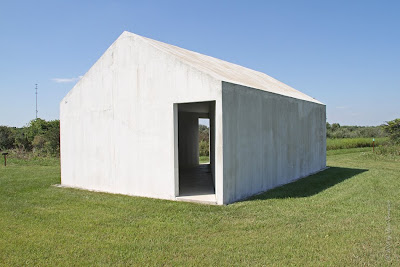 House Divided [1983]..
Artist: Bruce Nauman (American, b. 1941)
Materials: cast concrete
Commissioned by the Governors State University Foundation..
The marker reads..
Nauman draws on Midwestern roots for the form of this sculpture. The viewer is confronted with a large white building—typical of Midwestern farming sheds. When we step inside we are surprised to find the structure has, in fact, been divided in half, diagonally. Three entries to the outside create an uncomfortable space with no corners. Fully half of the structure has been rendered useless. The very private artist, he lives with his wife on a remote ranch in New Mexico, has observed that sometimes sculptures are created that appear to have a function, but when examined, don't. Ultimately, the object's function is for the viewer to ponder... 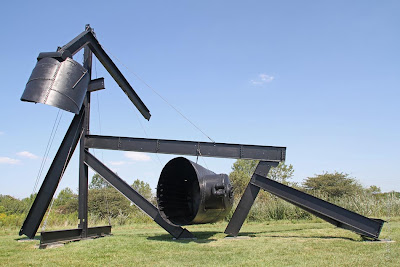 Yes! For Lady Day [1968-1969]..
Artist: Mark di Suvero (American, b. 1933, Shanghai, China)
Materials: railroad tank car, steel I-beams, cable
Gift of Lewis Manilow..
The marker reads..
Yes! For Lady Day was created over a period of two summers while diSuvero lived in a farmhouse on what was to become the GSU campus. Use of the house was loaned by Lewis Manilow, a prominent Chicago collector and philanthropist. The site became a gathering place for local sculptors: John Henry, Richard Hunt, John Chamberlain and others spent time there. Yes! For Lady Day was constructed of salvaged steel I-beams and a railroad tank car that was cut at a diagonal ellipse by the artist. DiSuvero’s distinctive approach has created an object of brutal beauty that dances in the prairie breeze. Its physical presence possesses all the hard-earned swagger of mid-20th Century U.S. culture, while its title directs us to a poignant note in American music history—the soulful and ultimately tragic blues singer Billie Holliday.. Bodark Arc [1982]..
Artist: Martin Puryear (American, b. 1941)
Materials: earth, wood, Osage orange trees, asphalt, stones, cast bronze
Commissioned by the Nathan Manilow Sculpture Park, GSU Foundation..
The marker reads..
Bodark Arc is an example of Land Art, so large it can be fully appreciated only by viewing from the air. Another example of this approach to sculpture can be found in Mary Miss’s Field Rotation, also in the Nathan Manilow Sculpture Park... 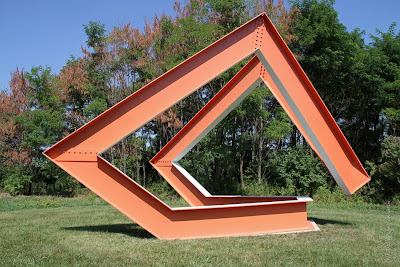 Phoenix [1968]..
Artist: Edvins Strautmanis (American, 1933-1992 (born in Latvia))
Materials: painted steel I-beams
Gift of Lewis Manilow..
The marker reads..
Its title refers to the mythical phoenix, a bird with beautiful gold and red plumage. At the end of its life-cycle the phoenix builds itself a nest of cinnamon twigs that it then ignites; both nest and bird burn fiercely and are reduced to ashes, from which a new, young phoenix arises. The bird was also said to regenerate when hurt or wounded by a foe, thus being almost immortal and invincible—a symbol of fire and divinity. At dusk, Strautmanis’ sculpture frames the western sun, which, like its namesake, dies in flames only to reemerge in the eastern morning sky.. 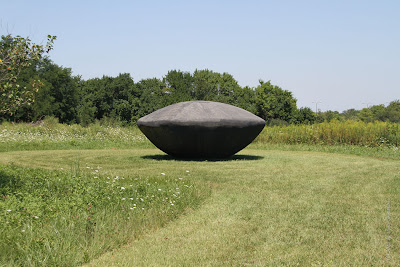 Flying Saucer [1977]..
Artist: Jene Highstein (American, b. 1942)
Materials: concrete, steel frame
Commissioned by the Nathan Manilow Sculpture Park..
The marker reads..
Flying Saucer grew out of a group of works created between 1976–77. Large spherical sculptures were made by hand-troweling concrete over an armature of wood or steel. All were painted black. An untitled example of these works remains in front of the student union at the University of Chicago in Hyde Park... 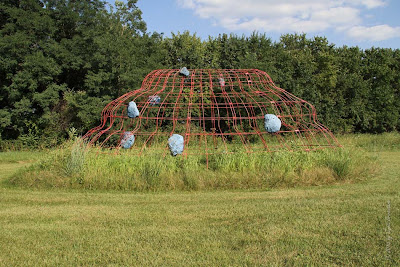 Sisyphus' Aviary [1984]..
Artist: Dan Yarbrough (American, b. 1958)
Materials: painted steel rebar, painted stones
Loan courtesy of the artist ..
The marker reads..
In Sisyphus’ Aviary, the viewer encounters a group of rocks from which they might choose their burden. The sculpture disappears and reappears from view, depending on what time of day, year, or from which angle it is encountered. Its delicate and open steel tracery functions as a formal counterpoint to the many sculptures in the collection, which use flat steel as their primary medium... 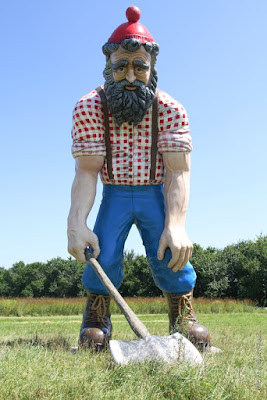 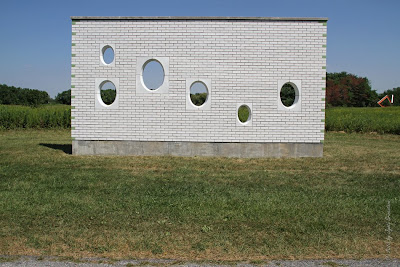 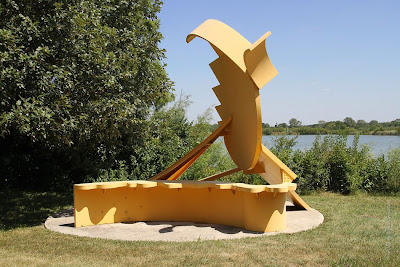 Icarus
By Charles Ginnever (American, b. 1931)
1975 / welded Cor-ten steel ..
The marker reads..
Icarus is one of a series of important works fabricated by Ginnever during the mid-1970s which use classical Greek sources for their titles. In the myth of Daedalus and Icarus, the two are imprisoned on an island. Daedalus fashions two sets of wings from wax and feathers so they can begin to make their escape high above the Aegean Sea. Icarus, enthralled by his newfound freedom and unwilling to acknowledge his vulnerability, ignores his father's warnings and flies too close to the sun, melting the wax and plummeting to his death. The story is a cautionary tale highlighting humankind's arrogance. It has been referenced many times by artists as varied as Pieter Brueghel, Peter Paul Rubens, and Chicago Imagist, Roger Brown... 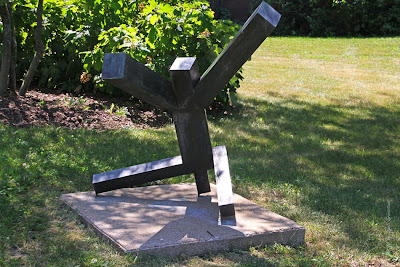 Untitled [1982]
Artist: Joel Shapiro (American, b. 1941)
Materials: cast bronze
Purchased by the Governors State University Foundation ..
The marker reads..
This untitled piece from 1982 is an intimate example of a series that Shapiro has explored for over 25 years. The viewer may initially see a group of cubist-influenced, oblong abstract forms. Soon, a figure with arms outstretched (or is it an energetic break-dancer, spinning on his head?) emerges. Shapiro reveals a deft hand, playing skillfully with our expectations of abstract sculpture...