This post is not for anyone with casual dillettante in sculptures or in the Public Art scene of Chicago; but for those who are passionate about it! Those who understand the importance of "The Picasso" sculpture at Daley Center Plaza, as the grandfather of Public Art Program in Chicago as well as its importance in advancing the acceptance of non-traditional contemporary art by public in general..

Here is a reproduction of the original mail signed by Pablo Picasso in August 1966, in France; gifting the sculpture to the Public Building Commission and it's maquette to the Art Institute of Chicago, desiring that these gifts should belong to the people of Chicago.. 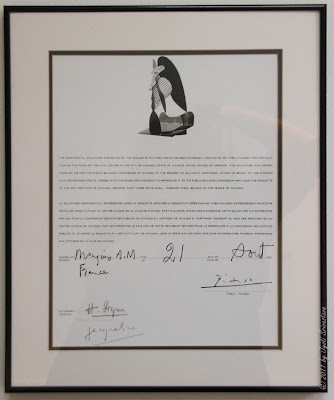 It reads..
This monumental sculpture portrayed by the maquette pictured above has been expressly created by me, Pablo Picasso for installation in the plaza of the Civic Center in the City of Chicago, State of Illinois, United States of America. This sculpture was undertaken by me for the Public Building Committee of Chicago at the request of William E. Hartmann. Acting on behalf of the Chicago Civic Center Architect, I hereby give this work and the right to reproduce it to the Public Building Commission and I give the maquette to the Art Institute of Chicago, desiring that these gifts shall through them, belong to the people of Chicago.. 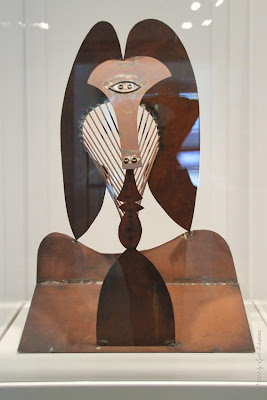 This marquette is at display at the Art Institute of Chicago, with the following text..
Maquette for Richard Daley Center Monument ..
Simulated and oxidized welded steel..
In May 1964, architect William Hartmann visited Picasso at his studio in France to see his proposal design for a monument for Chicago's new civic center. From initial drawings the artist produced models, first in cardboard and other materials, and finally in steel. Picasso studied these marquettes in his studio for nearly a year, observing them from various angles and under different light conditions, before identifying his final design.
To plan the sculptures construction , Picasso crafted two marquettes out of welded steel. He kept one in his studio and sent the other to Chicago. In August 1966, Hartmann returned to France to discuss the final design, including modification needed for the sculpture to withstand city's strong winds. Extremely pleased with the project, Picasso donated his design to the city and his marquette to the Art Institute. Dedicated by Mayor J. Daley, the sculpture was unvelied to record crowd on August 15, 1967. 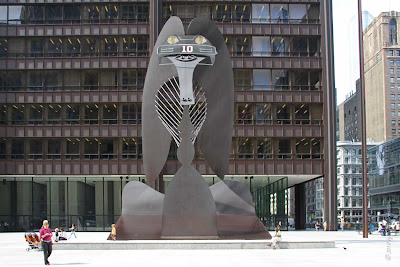 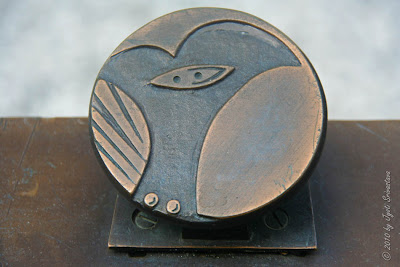 A stylized version also in the Daley Plaza..
Posted by Jyoti at Tuesday, June 21, 2011