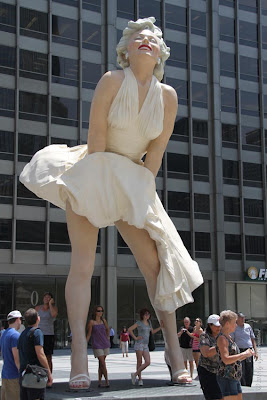 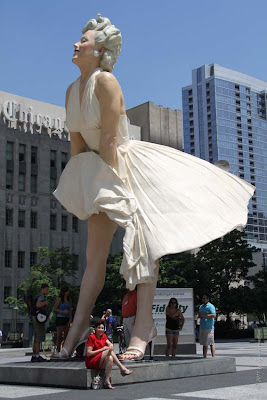 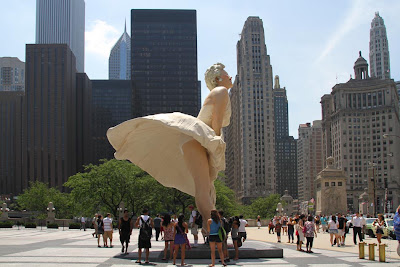 "Forever Marilyn" is a new sculpture and it's first installation is at Chicago. The Zeller Realty Group [owners of Pioneer Court] in collaboration with The Sculpture Foundation [Not-for-profit entity], commissioned the installation of the sculpture.

Seward Johnson is 80-year old sculptor from New Jersey. He has an interesting project, "Icons Revisited", where he creates sculptures based on popular images. Like..
Johnson has "created a series of sculptures that are inspired by well-known images [and] transformed these elements of popular culture and history to provoke questions in the viewer about the meanings of our icons, the passage of time and the impact societal changes have on the mythology of some of these beloved images."
- Paula Stoeke, Director of The Sculpture Foundation..

With Marilyn, we hope to rekindle an attitude and optimism from an era that this iconic figure represents – a time when we, as a nation and a people, were proud, productive, optimistic and self-assured, if a bit mischievous. We seek a return to American Exceptionalism, and trust Marilyn will propel our attitudes in the right direction,”
- Paul Zeller, President and CEO of Zeller Realty Group
[Press-release] 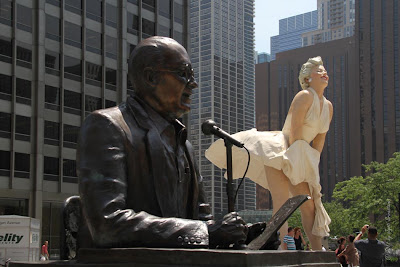 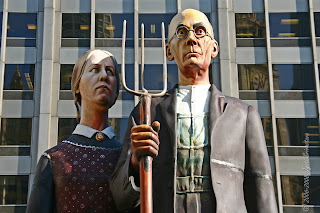 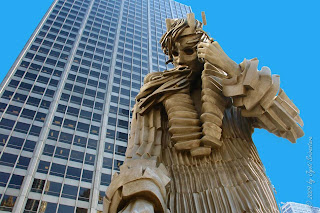 Johnson is most famous for creating scuptures about everyday people doing everyday thing. Few of his sculptures that I've seen.. 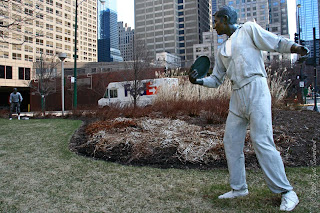 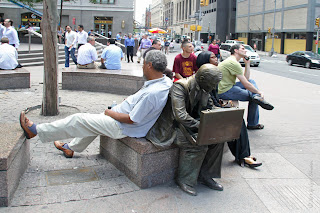 "Double Check" - by Seward Johnson..
which depicts a businessman sitting on a bench going through his briefcase.
Location: New York City's Liberty Park near the World Trade Center..

Coming back to "Forever Marilyn".. 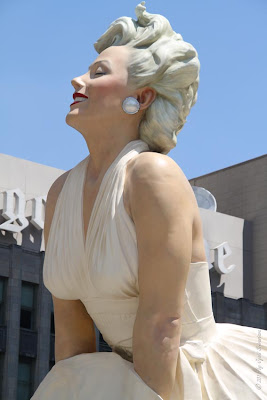 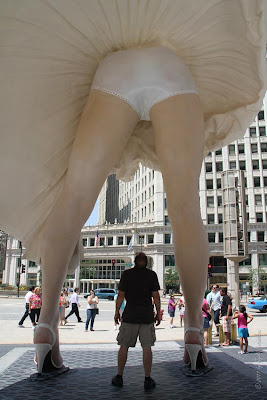 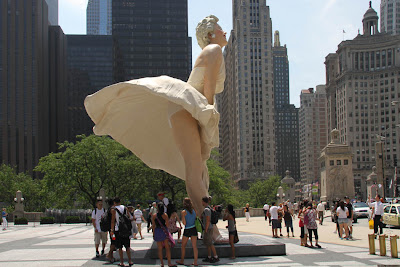 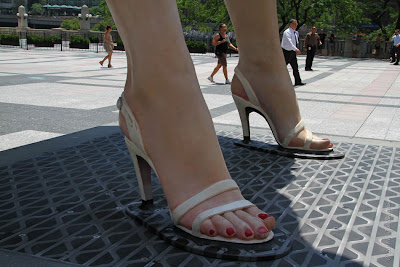 Personal Comment..
First and foremost - I love it!
I have read many negative comments like sexist, creepy, voyeuristic, not-a-piece-of-art, Disneyfication of Chicago and so on. Well at least it evokes sharp reaction! One cannot pass-by without noticing it! It's good when an iconic image is re-examined in public eye after a time gap. Being very interested in public-art, I am closely observing how people in general react to it. If there are sharp negative reactions, there are equally popular positive reactions! In it's brief stay in Chicago, I feel, it will soon emerge as one of the most visited and photographed destinations!

As for me, I love it!
I had seen it's photographs and read a few reviews, before I actually saw it yesterday, and as I was standing in front of it, I was like, really? This is what some people are so mad about? Are they mad about the popularity of the iconic Marilyn photo, or mad about a monumental sculpture made out of it? Or the fact that Marilyn's skirt is blowing in the wind, and people can see beneath her skirt, is way too much for people to handle? Or is it something about artistic integrity?

I feel Chicago has a place for pop-culture icon Marilyn Moroe's pop-art sculpture! And it's based on one of her most famous images. And I very much like the work of Seward Johnson and his project "Icons Revisited". When it's a Temporary Exhibit, it better be sensational, so that it stays in people's memories..

I think Chicago has a place for many different styles of sculptures and made by sculptors local or outside of Chicago. It can embrace neo-classical to modern, detailed to abstract and minimalist, serious to funny, iconic to mundane, fully-draped to nudes, and on topics timeless to contemporary. It has found a place for Augustus Saint Gaudens' stately "Lincoln" sculpture to cubist Picasso's "once" controversial "Picasso"; from Calder's playful "Flamingo" to Magdalene's soul-searching "Agora"; from detailed and timeless "Winged Victory" to Hunt's abstract "Eagle Columns" to Serra's minimalist "Reading Cones". I can go on-and-on.. The same holds for sculptor's Chicago based or not. From internationally acclaimed Joan Miro, Marc Chagall, Isamu Noguchi, Jaume Plensa, Anish Kapoor to artists who made Chicago their home like Lorado Taft, Leonard Crunelle, Albin Polasek, Abbott Pattison to contemporary Chicago artists Richard Hunt, Terrence Karpowicz, Tony Tasset, Dessa Kirk and many more.. and YES a place for New Jersey based Seward Johnson's "Forever Marilyn".

My one big complain is, Chicago still does not have a monument for Daniel Burnham!
And a wish.. I would love to meet Seward Johnson!

Since Marilyn is coming down in the spring what's next up?

Thanks for the memories. The marilyn statue has been done for a little while now, but it is definitely not forgotten.