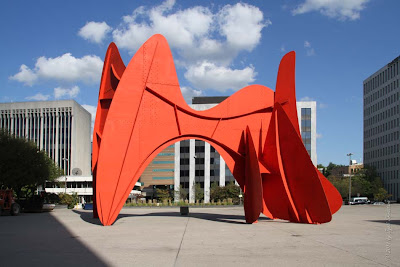 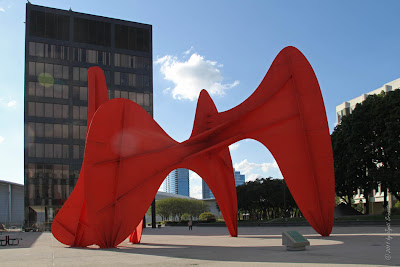 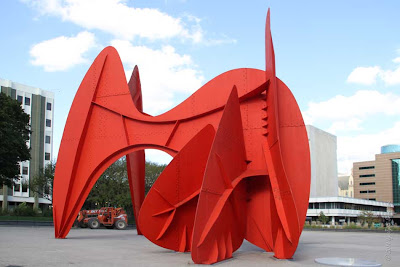 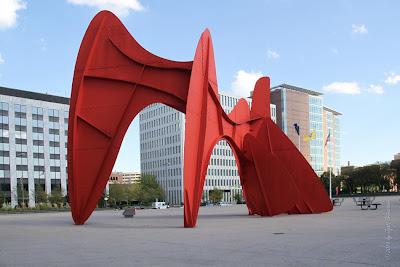 The plaque reads..
La Grande Vitesse..
"La Grande Vitesse" the bright red stabile created for Grand Rapids by renowned artist and sculptor Alexander Calder, is a distinctive downtown landmark. Weighing 42 tons and standing four stories high, the steel abstraction was named, La Grande Vitesse, by the artist himself., a reference to the river that flows through the heart of the city.

Commissioned in 1967 to be installed on Vandenberg Plaza, site of the city and county administrative buildings. The complete work was dedicated to Grand Rapids by the artist in June 1969. It was the first piece of Public Art in America to be financed entirely therough the combination of National Endowment for the Arts granmts and private funds.

As he worked on "La Grande Vitesse", Alexander Calder developed close ties to Grand Rapids. Later he produced other art works for the city. His "Festival Sun" was adopted as symbol for the city's annual festival of arts celebration. In 1974 he created the "Calder on the Roof" as a gift to the people of Grand Rapids. The colorful abstract painting covers the roof of the Kent County Administrative Building, and can be seen from the upper floors of the surrounding buildings.

In the years since the dedication, "La Grande Vitesse" has come to sumbolize the city of Grand Rapids. Its profile has been adapted as the city logo, and the stabile itself has become the focal point of the festival of the arts. Begun by the Arts Council of Greater Grand Rapids to promote arts in Grand Rapids, :Festival" went on to become the largest all-volunteer celebration of its kind in the nation. 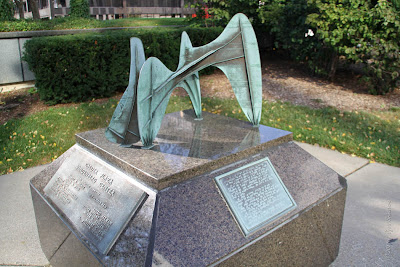 For the visually impaired..
A Scale Model [1/23 scale model of La Grande Vitesse] by sculptor hetzer Hartsock, in the southeast corner of the plaza.