The exhibition is organized into two major sections..
The War Room.. which deals with the horrors and reactions to war expressed through art.. and..
The Kunstkammer of Death.. a play on the traditional European term for a ‘cabinet of curiosities’.
While the subject matter may seem a bit macabre, artists have long derived inspiration from death, mortality, and the impermanence of human existence. This eclectic collection examines these concepts from centuries past to the present day. 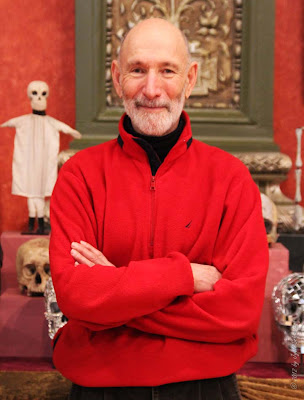 And as the event is getting closer, my curiosity is on a rise. I was browsing through some terminology related to the exhibition, like..
Dance of Death, Memento Mori, Vanitas and Kunstkammer..

DANCE of DEATH..
also variously called Danse Macabre (French), Danza Macabra (Italian), Totentanz (German), Danza de la Muerte (Spanish), is an artistic genre which most probably developed in France. click here.. It is about the universality of death: the Dance of Death unites all. .

In the Middle-Ages, the dance of death was though as a warning for powerful men, a comfort to the poor, and ultimately an invitation to lead a responsible and christian life. But its basic idea is even more simpler, more timeless: to recall the shortness of life. It makes men remember that they all will die, without exception.

In the first printed Totentanz textbook (Anon.: Vierzeiliger oberdeutscher Totentanz, Heidelberger Blockbuch, approx. 1460),
Death addresses, the emperor
Emperor, your sword won’t help you out
Sceptre and crown are worthless here
I’ve taken you by the hand
For you must come to my dance..

Death calls a peasant, and he answers..
I had to work very much and very hard
The sweat was running down my skin
I’d like to escape death nonetheless
But here I won’t have any luck.. 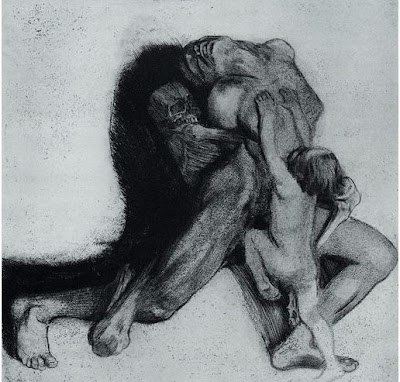 From the official website..
In this print by Kollwitz, the dance of death has become an agonizing struggle. Acceptance of death has been transformed into a tug of war between the child in the foreground, and the skeleton at the rear, with the body of the mother as the ultimate prize.. 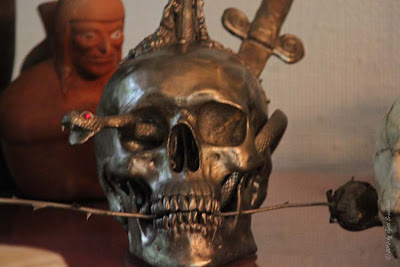 VANITA ART...
click here..
Vanitas is a specific genre of art in which the artist uses morbid symbolic objects (such as skulls, rotting food, fading flowers etc.) in order to produce in the viewer's mind an acute awareness of the brevity of life and the inevitability of death. The origins of the term can be traced back to the latin biblical aphorism: vanitas vanitatum omnia vanitas (Ecclesiastes 1:2) [Vanity of vanities; all is vanity.]

The style rose to prominence in the 16th and 17th century, primarily in the Netherlands, Flanders and France. Though it lost much of its popularity around 1650, its influence remains clearly visible in many modern works of art, such as Paul Cezanne's "Pyramid of Skulls".. and Pablo Picasso's "Still Life with Skull"... 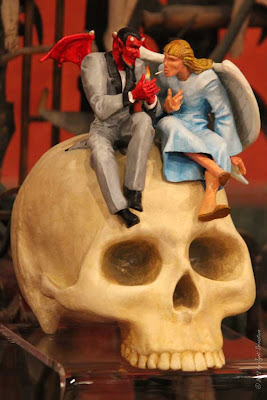 KUNSTKAMMER..
A cabinet of curiosities / A cabinet of wonders..
Kunstkammer was an early form of museum: part art gallery, part study room. The tradition began in Europe during the Renaissance era, as rulers, aristrocrats and successful members of the merchant class collected and displayed arts and artifacts from different cultures, continents and time-periods together in one cabinet or room.

In the context of the exhibition, "Morbid Curiosity: The Richard Harris Collection", the Yates Gallery presents the Harris “cabinet of curiosities"..
This room also displays Mexican, Mesoamerican and Asian art, showing a different understanding of death. The collection’s works explore themes such as the beauty of the human body and concepts such as vanitas, or the Christian notion of the vain, shallow obsessions of the living contrasting with the more important inevitability of death. 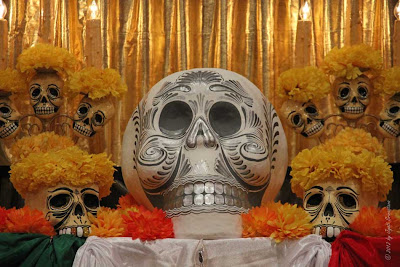 DAY of the DEAD..
Spanish: Día de Muertos.. is celebrated throughout Mexico and around the world in many cultures. The holiday focuses on gatherings of family and friends to pray for and remember friends and family members who have died. 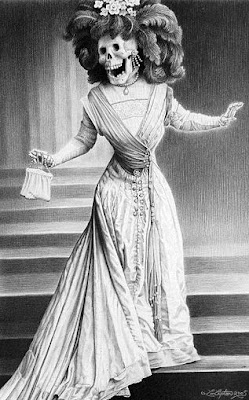 Presented by the Chicago Department of Cultural Affairs and Special Events in partnership with the Chicago Office of Tourism and Culture, Morbid Curiosity: The Richard Harris Collection showcases a wild and wonderfully eclectic selection of nearly 1,000 works of fine art, massive installations, artifacts, crafts and decorative objects that explore the iconography of death across a variety of artistic, cultural, spiritual practices from 2000 B.C.E. to the present day.