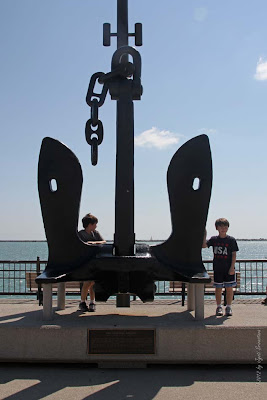 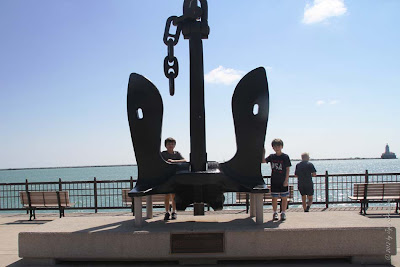 The plaque reads..
This 8 ton anchor is from the third warship named after the City of Chicago. The first "Chicago" was part of the Great White Fleet and saw service from 1889 to 1928. The second was commissioned in 1931, and after distinguished service in WW II was sunk by enemy action in 1943 in the Guadalcanal area. The third "Chicago" from which this anchor was salvaged, was commissioned in 1945 as a heavy cruiser, and after WW II action was converted to a guided missle cruiser (CG-11). She saw service in Vietnam and received the Navy Unit Commendation. She was 671 feet long with a 71 foot beam, and displaced 17,700 tons. She was decommissioned in 1980. This anchor is dedicated as a memorial to each ship named "Chicago" and to the thousands of men and women who served their nation in maritime service. 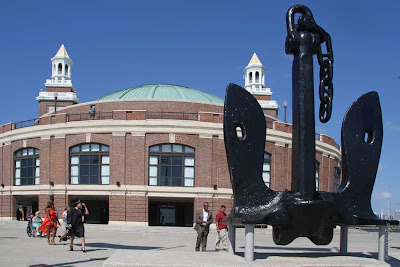 The USS Chicago anchor.
In the background is a Chicago landmark Bldg. Navy Pier Headhouse and Auditorium. For more on this, click here.. 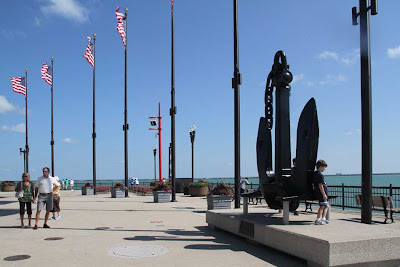 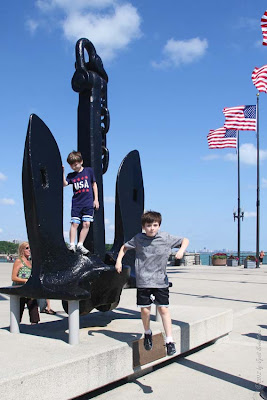 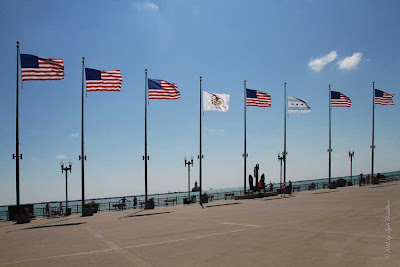 I saw the USS Chicago in San Diego Harbour while on vacation in 1978. At the time she was a guided missile ship. We were told that the City of Chicago supplied all the silverware to the ship.
Norm Cherry

I was the 13th enlisted man assigned to the uss Chicago CG-11 during her conversion to CG-11 in San Francisco, Ca. in 1962 and went on to become a plankowner/crew member at her recomissioning. I am Leroy H Ashworth and was an Engineman 1st class petty officer at the time. I an still very proud and honored to have served on her.


And in response to mr Norm Cherry, yes it is true that the Uss Chicago CG-11 was gifted with a set of silverware from the city of Chicago and was located in the officers wardroom until her final decomissioning.