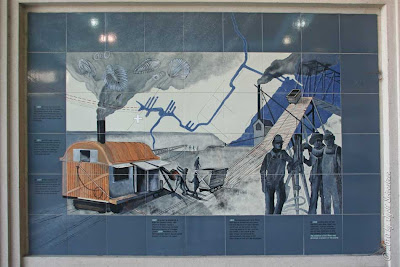 1889: The Sanitary District of Chicago (in 1989 renamed The Metropolitan Water Reclamation District of Greater Chicago) was established and a plan was implemented to improve the city's sewage disposal system by reversing the flow of the Chicago river to carry waste water away from Lake Michigan, the source of the city's drinking water.
1892: Steam shovels were used to dig the Sanitary and Ship Canal, and rail cars carried earth out up the steep incline. Running parallel to the old Illinois & Michigan Canal, the Sanitary and Ship Canal was much wider and deeper and allowed for the necessary increase in the flowage of water out of Lake Michigan. The Sanitary and Ship Canal also allowed larger commercial vessels to travel to the Gulf of Mexico by way of the Illinois and Mississippi rivers.
1900: When completed, the reversal of the Chicago river was recognized as a great wonder of the modern engineering world.
Posted by Jyoti at Sunday, December 02, 2007