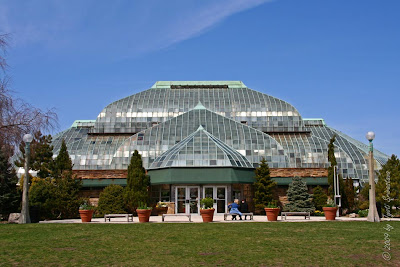 Completed: The conservatory was constructed in phases between 1890 and 1895 .. It replaced a small greenhouse that dated from the 1870s.
The conservatory has four display houses: the Palm House, Fern Room, Orchid House and Show House [home to the annual flower shows].. 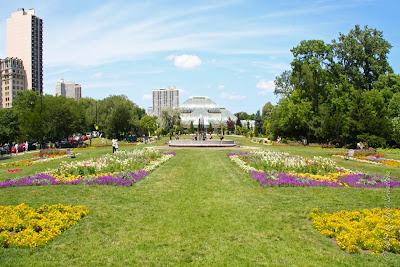 French-style Formal Garden, in front of the conservatory ...
Formal Garden ...
A marker in the Formal Graden reads ...
One of Chicago's oldest existing gardens, Lincoln Park's Formal Garden was designed and planted in the late 1870s. It was one of several landscape improvements made when the park was expanded from its original sixty acres to new boundaries between Diversey Pkwy. and North Ave. [Today, the park stretches from Ardmore St. to Ohio St.] The garden originally surrounded the park's first greenhouse, which dated to the same period. Flowers propagated in the greenhouse were planted in the garden. The formal design of this "French style" garden was considered especially appropriate as the setting of a horticultural facility. The garden remained after the greenhouse was demolished in 1890 and replaced with the impressive Victorian conservatory, which still stands today ..

It is noteworthy that this formal French garden is adjacent to the historic Grandmother's Garden, an English style cottage garden located on the west side of Stockton Drive. 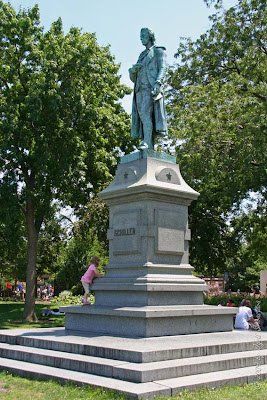 Schiller Monument..
Sculptor: Ernst Bildhauer Rau
Installed: 1886 ...
Continued from the marker in the Formal Garden ...
This formal garden been the setting for important works of sculpture since its early history. The Monument to Johann Christoph Friedrich Schiller, "prince of poets" was commissioned by a group of Chicagoans of German descent and dedicated in 1886 .. An exact replica of a sculpture erected ten years earlier in Schiller's birthplace in Germany, this work is considered a masterpiece of its sculptor Ernst Rau ..
# For more, click here.. 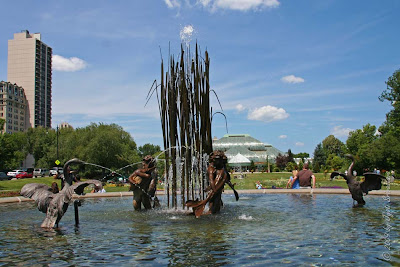 Stroks at Play...
Also known as "Eli Bates Fountain" ...
Installed: 1887 ..
A gift by renowned sculptor: Augustus Saint-Gaudens ...
Location: The Great Garden [Lincoln Park] ..
In 1887 a second sculpture Storkes at Play, also known as the Bates Fountain was placed in the garden. A gift of lumber baron Eli Bates, the fountain sculptures were created by the renowned artist Augustus Siant-Gaudens and his assistant Frederick William MacMonnies.
For more, click here ... 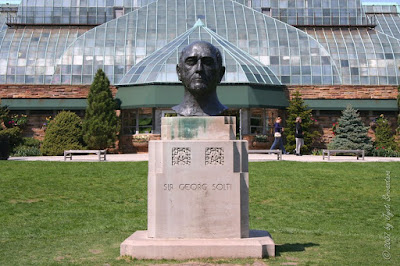 Such a nice blog.
It's helped me a lot.
Thanks for posting this blog.
conservatory installer in watford