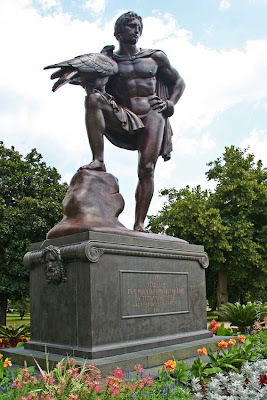 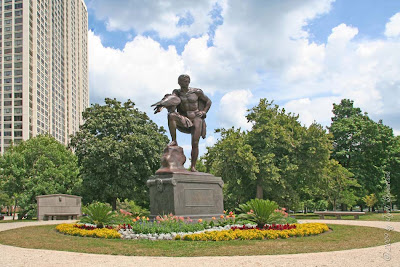 The city of Chicago's Official Tourism Site has some interesting story behind his sculpture .. click here ..
In 1911, the Goethe Monument Association held a competition to select a sculptor for the memorial. The committee members specified that they did not want a figurative portrait of Goethe. They believed that this directive would release artists “from the trammels of costume and conventionality” and permit them “to give free flight to their imagination and enthusiasm.” The Art Institute displayed the nine models produced by the artists who had participated in the competition. The winning project was submitted by Herman Hahn [1868-1944], a professor and sculptor from Munich, Germany. He created a Greek god-like figure of young man with an eagle on his knee to symbolize Goethe’s “Olympian achievements.” Hahn’s design, installed in 1913, includes a low wall with a bas relief portrait of Goethe himself, as well as a quotation from his Faust, in both German and English.

In 1951, the bronze statue was struck by lightening and the left foot crumbled. The statue was removed and the ankle, foot, and base were recast. In 1998, national nonprofit organization entitled Save Outdoor Sculpture! sponsored the conservation of the enormous bronze sculpture. A couple of years later, the park district also restored the sculpture’s landscape setting. 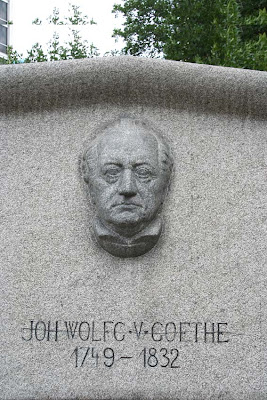 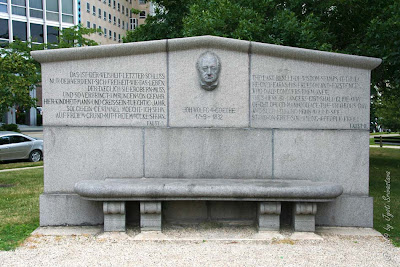 The inscribed words ..
The last result of wisdom stamps it true:
He only earns his freedom and existence,
Who daily conquers them anew.
Thus here, by dangers girt, shall glide away,
Of childhood, manhood, age, the vigourous day:
And such a throng I fain would see,
Stand on free soil among a people free ..
- Faust 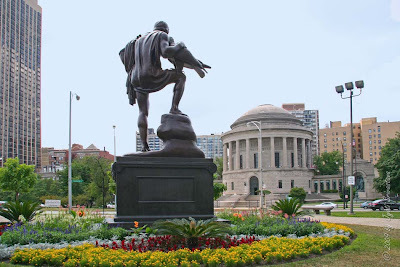 Check the spelling on Goethe. It should be Goethe and not Gothe.